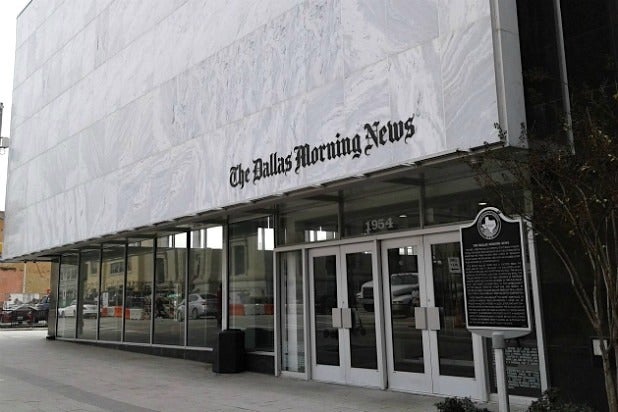 The Dallas Morning News will lay off 43 employees as part of a company-wide restructuring, the paper announced on Monday. Of those departing, 20 will be writers, with the rest comprised of editors and support staff.

In a statement to the paper, publisher Grant Moise said he was looking to pivot the Morning News toward a subscription model.

“After considerable thought and analysis, our management team has determined that our business in the future is largely supported by subscription revenue and the need for more aggressive investment in our digital products,” he said.

Moise declined to offer anything further to TheWrap.

Like so many other local papers, The Dallas Morning News has been beset by circulation falloff and declining revenue. Earnings for the publication’s parent company A. H. Belo Corporation declined roughly 20 percent in 2018, according to the paper. The cuts to the Texas daily account for roughly four percent of the A. H. Belo workforce and were characterized by the paper as a “company-wide reorganization.”

“We are rebalancing our financial resources to support these new foundational elements so we are positioned for success and can deliver quality journalism for many years to come,” Moise said.

“So many talented journalists are leaving @dallasnews today who will announce their status on their own terms. This should be another grim reminder that local news is at risk, and with it a vital part of democracy. For now, there’s still a paper to get out,” Dom Difurio, a producer at the paper, said on Twitter Monday shortly after the news broke.

The shakeup in Dallas is the first major media layoff of 2019 and suggests many of the broader industry headwinds that have been plaguing regional papers for years are not abating. A growing number of publications have decided to institute paywalls and subscription revenue models, which has provided a safe harbor for some (like The New York Times, Wall Street Journal and Washington Post), but is proving far riskier for digital-first properties and city papers like the Morning News.

In 2018, similar dramatic layoffs were witnessed at both New York’s Daily News and The Denver Post.