Three suspects were in custody and police used a robot with a bomb to kill a fourth in a garage, police said. That suspect had exchanged gunfire with officers and was threatening to kill more police, Dallas police chief David Brown said. He was killed after negotiations stalled, Brown said.

None of the suspects have been identified as of this writing.

Mark Hughes, the brother of one of the protest organizers, was initially identified as a “suspect” by authorities and turned himself in Thursday night. Hughes, who was legally carrying a rifle while attending the rally, was released from custody around 1 a.m. on Friday, Dallas CBS station DFW reported.

Police also said a “suspicious package” was found near a suspect who faced off with SWAT officers before being taken into custody.

“It’s a heartbreaking moment for the city of Dallas,” Dallas Mayor Mike Rawlings said, according to the Dallas Morning News.

We just lost another. Officer Down 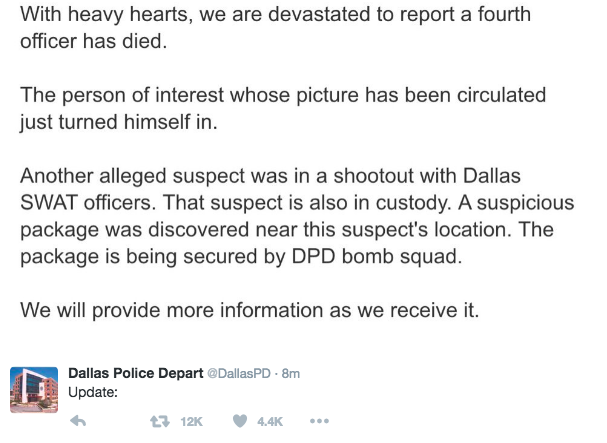 Also Read: Obama Sounds Off on Police Shootings: 'All of Us as Americans Should Be Troubled'

Here is a picture of the tweet in which police misidentified Hughes as a suspect: 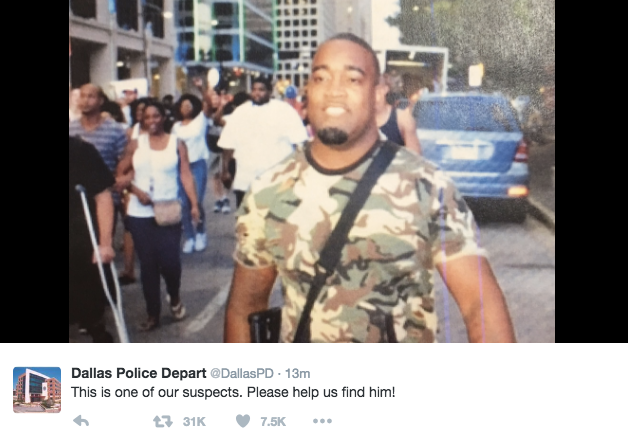 The shootings occurred as hundreds of people were marching in downtown Dallas in response to the police killings this week of two unarmed African American men: Alton Sterling early Tuesday in Baton Rouge, Louisiana, and Philando Castile near St. Paul, Minnesota.

A witness who was at the protest told CNN affiliate KTVT that he heard multiple gunshots during the Dallas rally.

“Whoever was shooting had an assault rifle — and I know guns. The shots were in rapid succession,” the witness said.

The shootings immediately intensified the national debate on gun violence. On CNN, a discussion that was focused on the Minnesota and Louisiana shootings shifted to the grim realization that someone had systematically targeted police.

Attorney and advocate Areva Martin said on the air that she hoped the sniper’s actions would not “in any way mark the peaceful protestors who were out there.”

Also Read: Beyonce Is 'Sick and Tired' of Seeing Black Men Killed by Cops: 'It Is Up to Us to Take a Stand'

The mass shooting came just weeks after the killing of 49 people at a gay nightclub in Orlando, the largest mass shooting in modern U.S. history. But this time the victims were police trusted to enforce the laws.

The tragedy is certain to add to a raging gun violence debate, which included Democratic lawmakers staging a filibuster and sit-in to demand greater restrictions on access to guns.

The killings of Sterling and Castile added to pleas for better and more just policing. Hours before the officers were shot in Dallas, Minnesota Gov. Mark Dayton questioned whether Castile would have been killed if he were white.

President Obama said the shootings were “symptomatic of a broader set of racial disparities that exist in our criminal justice system.” Beyonce called for an end to police shootings.