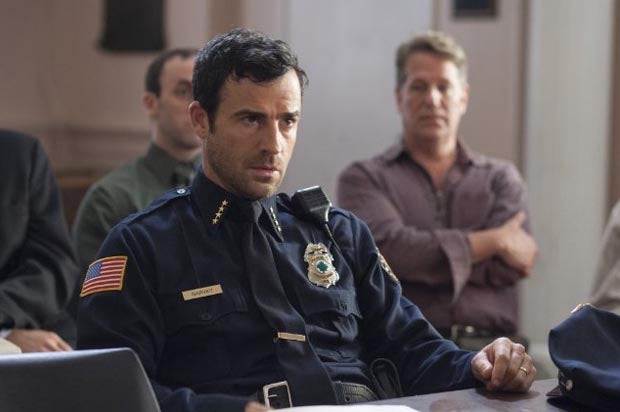 Damon Lindelof, one of the creators of HBO’s “The Leftovers,” will do anything to get an Emmy nomination. He’ll have star Justin Theroux do anything, at least.

In a series of Instagram posts Monday night, Lindelof took a fresh approach in convincing Emmy voters to nominate “The Leftovers.” “Nominate Theroux and the sweatpants go away,” the “Lost” co-creator wrote above a sweaty, shirtless Theroux.

The “For your consideration” period this year has had a few unconventional ploys to lure Emmy voters — like real-life handmaids from Hulu walking around Los Angeles. But this line of argument just might be the most convincing — at least to those who lust after the actor, who is married to “Friends” star Jennifer Aniston.

Lindelof wants voters to know that they don’t have to vote for just Theroux in order for those sweats to fall to the floor, promising the same outcome is they vote for his co-star Carrie Coon (below).

Yes, the show’s cast and crew is stocked with talent, but here’s Theroux with his twelve-pack:

And, as he says in the caption of Lindelof’s final photo, the original screenplay just said what we’re all thinking.

This was the line as originally scripted. Eccleston changed on the set because he's a genius worthy of an Emmy nod. #TrueStory #ButISitTrue #KevinBelievesIt #WhyWouldntHe

Nomination-round voting for the 69th Emmy Awards closed last night at 10 p.m. Now it’s just a waiting game, and we hope that “The Leftovers” gets at least one nod to see if Lindelof and Theroux come through.