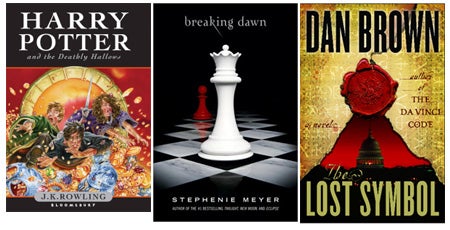 The Lost Symbol, the latest novel by “Da Vinci Code” author Dan Brown, is breaking all sorts of sales records for its publisher, Knopf Doubleday.

The book sold more than a million copies in the U.S., Canada and U.K. on Tuesday, the publisher said.

Amazon.com and Barnes & Noble said, when you include pre-orders, the thriller set records for a single day, too.

But it ain’t no Harry Potter. J.K. Rowling’s “Harry Potter VII: Harry Potter and the Deathly Hallows,” the final novel (for now) in the Harry Potter franchise, sold 15 million copies in the first 24 hours – 11 million in the U.S. and U.K. alone.

One of the reasons is that books like Harry Potter transcend the adult-young adult divide, where kids and their parents – and even non-parents – were drawn into the series.

These books, of course, are big business for Hollywood.

The Ron Howard-directed "Da Vinci Code" has grossed more than $758 million worldwide since its release in 2006 – including $77 million its opening weekend, according to Box Office Mojo. "Angels & Demons," a prequel, didn’t do quite as well, grossing $46 million for its opening earlier this year. Twilight had a $69 million opening, while the first Harry Potter film did more than $90 million.

To date, the six Harry Potter movies have generated a worldwide total of – get ready for it — $5.4 billion.