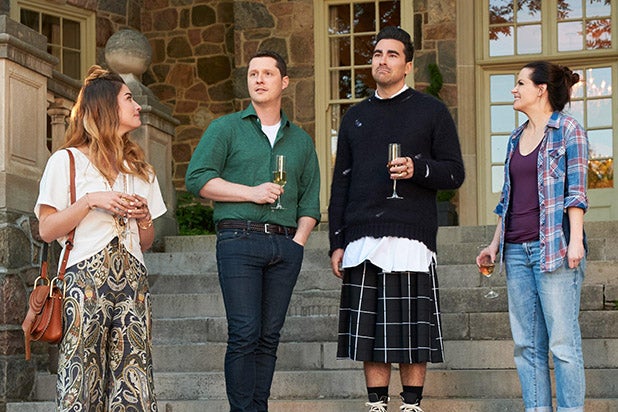 HBO’s social-distancing satire “Coastal Elites” is packed with top-tier acting talent, several of whom are finalists for Emmys this year.

Stars Bette Midler, Issa Rae and Dan Levy were asked about receiving Emmy nominations during the coronavirus pandemic while sitting on Wednesday’s virtual CTAM press tour panel promoting their upcoming quarantine comedy. The trio was also asked for their thoughts on this year’s virtual celebration, which will be hosted by Jimmy Kimmel and air on ABC.

“Schitt’s Creek” co-creator, showrunner and star Levy found the humor — and potential storyline — in the situation.

Also Read: Issa Rae Got an Education in Ivanka Trump for 'Coastal Elites': 'The More I Found Out, the More Horrified I Was'

“We just couldn’t help but think of how on-brand of our show it was to have this kind of recognition in our last season and then not be able to see each other,” Levy said. “It does feel very in line with something we would write for our characters.”

“It was like, ‘Of course.’ We have a big year and it’s very exciting, but we can’t see each other,” the “Insecure” creator and star said. “We drank and Zoomed, I toast to the camera, and then everybody left to our respective corners. It was just kind of anticlimactic.”

Also Read: 'Schitt's Creek' Ends: Where You Can See the Actors Next

As for the 72nd Emmy Awards, which will be presented virtually on Sunday, Sept. 20, both Rae and Levy are not planning to sit home alone in their sweatpants.

“I’m excited to see the ingenue of the awards shows to make it happen,” Rae said. “I’m going to have a safe party anyway. I feel like I have to.”

“The awards show, whatever it may be, will obviously be kind of fun — or not,” Levy said. “Who knows? Look, we’re going to have a good time, and I think my dad is saying we might just put a tent up here in our backyard here in Toronto and have people over and be six feet apart, share a toast or something. I dunno, it all sounds very wild.”

Also Read: How 'Schitt's Creek' Built Dan Levy's Confidence: 'Writing This Show Was a Catharsis for Me' (Video)

And yes, we promised you something from Bette Midler. Nominated as a guest star on Ryan Murphy’s “The Politician,” Bette just can’t wrap her head around this whole virtual Emmys thing — especially the planning process.