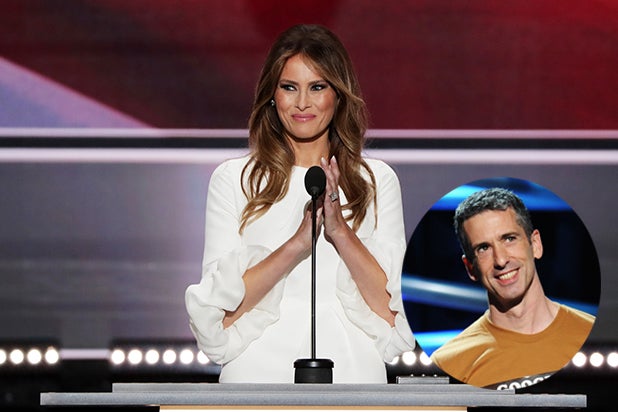 Author and sex columnist Dan Savage says many liberals are giving first lady Melania Trump a pass because she’s pretty — and that she doesn’t deserve one.

“God knows there’s enough hate in the world and I don’t want to add to the sum total, but forgive me, I have got to get this off my chest: I f—ing hate Melania Trump,” Savage, who is also an executive producer of ABC’s “The Real O’Neals,” said at the start of his latest “Savage Love” podcast.

“I’m not alone in loathing Donald Trump’s third wife — she’s married to a misogynist after all. Odds are good her husband hates her too,” Savage continued. “But there are some folks on the left who not only don’t hate her, they view her as some sort of sympathetic figure. The pretty princess in the tower locked up by the orange ogre with the bad combover, a princess desperately blinking out distress signals during swearing-in ceremonies and inaugural balls.”

Savage is right that some liberals have expressed at least sarcastic sympathy for the first lady — “Free Melania” signs were a not-uncommon sight at the Los Angeles Women’s March the day after Trump’s inauguration.

“It’s definitely not true in this case. Mrs. Trump, Melania Trump, is as ugly on the inside as she is pretty on the outside. She is a birther. Pretty Melania went on TV to push the same racist conspiracy theories about Barack Obama that her husband did. She’s an immigrant who doesn’t give a s— about the plight of other immigrants. She’s famously a plagiarist. And she’s brought ruinous lawsuits against journalists and bloggers accusing them of among other things, potentially interfering with her ability to profit off her role as first lady.”

Melania Trump’s legal team has successfully targeted reporters who have made baseless suggestions that she worked as an escort years ago. Last month, a New York Times reporter apologized for calling her “a hooker.”

People of all political stripes have argued in in the past that presidents’ families should be off-limits in the criticisms of their policies. But Savage said President Obama’s right-wing critics didn’t apply that rule to Michelle Obama.

“I don’t know if you can impeach a first lady or how that would work, but I do know that we would have found out pretty f—ing fast if Michelle Obama had said the same during her husband’s presidency,” Savage said.

Also Read: Dan Savage Takes 'It Gets Better' to MTV -- and May Have a Deal for Santorum (Video)

He also referred listeners to a ThinkProgress article about Melania Trump visiting a Washington, D.C. hospital where she reportedly said the power of nature could help heal sick children.

Savage said President Trump’s environmental policies and repeal of Obamacare would both hurt those children.

He also cited a pre-Obamacare Harvard University study that linked 45,000 deaths each year to a lack of health care coverage.

Savage, a longtime activist and left-wing provocateur who formerly hosted an MTV advice show, has previously launched campaigns that ranged from the cruelly mischievous to the widely praised.

He and his husband, Terry Miller, introduced the It Gets Better project in 2010, in which people including President Obama recorded hopeful messages urging bullied gay teenagers not to commit suicide. Savage is also responsible for ruining former Sen. Rick Santorum’s Google results.

It’s looking like Melania Trump won’t get an invitation to film an It Gets Better video anytime soon.