Actor Dan Stevens elicited gasps from both hosts and viewers of the British chat show “The One Show” on Wednesday, when he dissed the hell out of UK Prime Minister Boris Johnson by comparing him to disgraced U.S. President Richard Nixon.

When prompted by co-host Alex Jones explain the show’s “take” on the scandal, Stevens began, “Well, what you’ve got is a criminal for a leader, who is wrapped in a messy war, embroiled in a stupid scandal and surrounded by ambitious idiots, and really should resign…”

He then paused, pretending to be genuinely lost in his thoughts, before adding, “No, I’m sorry, that’s the intro to Boris Johnson.” 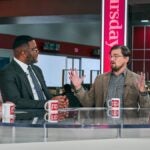 While the jab drew a laugh from co-host Jermaine Jenas, Jones grinned slightly, appearing shocked and unsure of what to say. Meanwhile, the unexpected joke produced a wave of gasps from the audience. On social media, the actor’s words were widely celebrated.

Stevens’ comment comes just a day after Johnson was fined for his role in the so-called “Partygate” scandal, where the leader hosted illegal parties within his inner circle amid the nation’s strict pandemic lockdown. Incidentally, the fine was for a party held at 10 Downing Street, the same building where the UK’s coronavirus laws were passed.

News of the illicit gatherings have long sparked outrage among citizens, who were obliged to observe lockdown orders that sometimes prohibited contact with dying relatives. Johnson is the first PM to have been found in breach of his own law, and angered Britons have understandably demanded Johnson’s resignation. In the latest update, Justice Minister David Wolfson resigned from his post, citing the government’s disregard for the rule of law, and members of parliament belonging to Johnson’s own conservative party have similarly called for resignation.