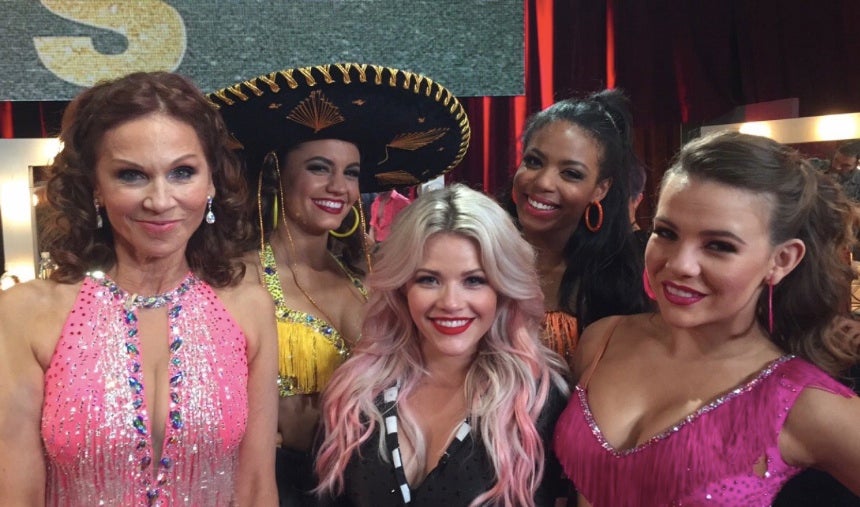 It was Latin night on “Dancing With the Stars,” and that meant a special appearance from Pitbull — whose parents are Cuban — as a guest judge on the ABC reality hit.

The singer filled in for Len Goodman, who’s currently in the U.K. judging the British version of the dance competition series, and kicked off the show with a performance of his energetic song, “Greenlight.”

After setting off sparks with an altercation with judge Julianne Hough earlier in the season, model Amber Rose went out with a bang as she was voted off the show.

“This has been an amazing experience, people don’t know this about me, but I am really shy,” she admitted. “I think this showed on the dance floor.”

With no one being eliminated last week, the pressure was even higher on Monday’s episode, especially for struggling swimmer Ryan Lochte — who was stuck at the bottom of the leaderboard.

The Olympian’s salsa was praised for its neon and spray tan more than the dancing skill, but Hough said he “nailed it, and Bruno Tonioli dubbed it “radioactive and fun.”

Her effort didn’t go unheeded, and Tonioli told her: “You always go for it, like a fierce little tiger,” even though at times “it was a bit fuzzy.”

“I felt like your anger and intensity was one-dimensional,” Carrie Ann Inaba critiqued.

After having a tearful breakdown during rehearsals (and when she was voted off), Rose performed a “cliffhanger,” according to Tonioli, while Hough passionately told her that she wanted to see more ass smacking. “Just smack it and give it!” she said.

IndyCar’s James Hinchcliffe made up a Latin alter ego named Ricardo to get into character, which got a bit weird … but the results were delicious. “I kind of feel all evening that I’ve been eating chips and salsa and you just brought me the whole enchilada,” Inaba gushed. “That was incredible.”

“It was sexy, it was powerful, it was lust,” Pitbull praised, and Hough called him “the best male dancer we’ve had on this show.”

After a breakthrough last week, Marilu Henner continued to step it up with “stunning legs” and “ladylike” moves.

Singer Jana Kramer claimed she had “trouble being sexy,” but she managed to add plenty of sizzle. “That was being sexy!” Hough screamed. “I think you just set the record for the hottest Argentine tango.”

Next up, actress Maureen McCormick was praised for her “positivity” and being game, like “a pink flamingo on a stick,” she claimed.

Shirtless NFL star Calvin Johnson Jr. was struggling to be sexy, but managed to be “large and in charge,” Inaba said. “There was a magnetic intensity that was so sexy,” she added.

Gymnast Laurie Hernandez was “on fire” but didn’t use her hips to get deep into the ground enough” Hough said. However, Tonioli thought she “looked like a little chicky salsa devil.” Yeah, we don’t know what that means either…

Judge Len Goodman will be back next week to usher in the next round of eliminations.