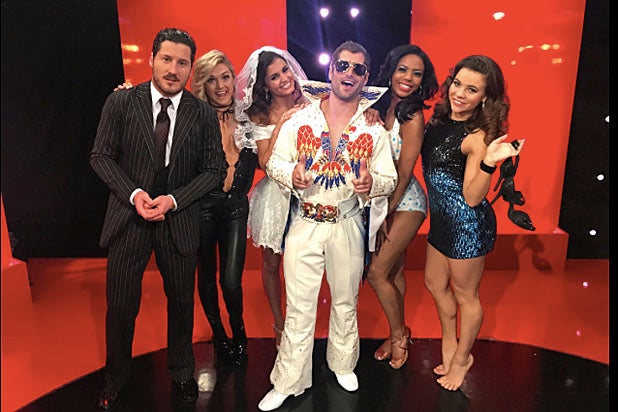 Season 24 of “Dancing With the Stars” headed to Sin City on Monday night as the ABC reality contest hosted its Vegas Night.

Fortunately, most of the contestants channeled the more family-friendly side of the Strip, rather than its multiple adult “dance” shows.

Also Read: Here's Why Mr. T Will Probably Be Pitied on 'Dancing With the Stars' (Video)

Spanish-American actress Charo and former “Bachelor” Nick Viall ended up on the chopping block and sadly it was fan favorite Charo who got the ax.

In her farewell speech, she said she was “having a very good time, enjoying it very much,” but told Bruno Tonioli: “I will see you in the parking lot.”

Earlier in the show, Viall admitted that he is just “an average schmuck who has spent more time looking for love the last few years, than dancing,” he admitted.

The reality romeo took on the tricky challenge of a Tango to Lady Gaga’s “Poker Face,” after which Len Goodman “saw a little bit of improvement … it’s better than last week, so good on you,” he said.

Mr. T. was determined to show a different side of himself with a Foxtrot to “Ain’t That a Kick in the Head” by Robbie Williams to channel old school Vegas. The trick worked like a charm on Julianne Hough, who thought it was absolutely beautiful. “As you said, this Foxtrot fits you like a T,” she gushed.

Former pro bull rider Bonner Bolton was restricted with the Charleston after breaking his back last year, which concerned pro partner Sharna Burgess. “It feels like a big cluster—,” right now, he said during rehearsals. However, Tonioli said it needed to be far more high octane. “You missed the timing and the precision,” he said, while Goodman said “it was a little too safe … the Charleston needs to be a wild and wacky ride.”

Former “Glee” actress Heather Morris was reliving her time playing Britney Spears on the Fox show by performing to “Toxic” with a ballroom Tango.

Carrie Anne Inaba admitted that she was worried Morris would just do what she’d done before, but instead she “brought the ballroom to Britney.” Goodman played a poker analogy saying, “You went all in — all your chips.”

Before she was voted off, Charo went to the “Chapel of Love” by the Dixie Cups with a Foxtrot, which Tonioli described as “surprisingly refreshing, pure, it’s like a born again virgin.”

Goodman said her Quickstep “had speed but it had grace, it was fast but you didn’t hurry … it was great,” despite Inaba questioning the quality of the Olympian’s lift.

Ice skater Nancy Kerrigan was praised for her Samba (to “Shake Your Bon-Bon” by Ricky Martin), with Goodman bizarrely telling her “your bum was bouncing about like a ball on a roulette wheel,” calling it the best dance he’s seen this season.

Chicago Cubs World Series Champion David Cross knocked a Jazz to “Candy Shop” by 50 Cent out of the ball park, which prompted the audience to explode. “Move over Magic Mike!” Inaba gushed. “You hit those moves with lots of flavor” for the raunchy tongue-in-cheek performance.

Tonioli described it as “nearly Full Monty with thunder in the underpants.” Wow …

Reality star Erika Jayne Jived to “Take Me to Heaven” by Patina Miller & Debbie Kurup & Amy Booth-Steel, after which she was told she has “legs for days … so bendy and stretchy.” Although Inaba said they dropped out of sync a lot.

NFL player Rashad Jennings is at the top of the leaderboard — and wants to stay there — with a little help from his Samba to “Swalla” by Jason Derulo featuring Nicki Minaj & Ty Dolla $ign. Hough wanted to love it … but didn’t. “This wasn’t your best dance,” she said. “But I’m not worried about you. Samba is really hard.”

Fifth Harmony singer Normani Kordei has no doubt performed in Vegas her fair share of times, and even though she had to practice her Foxtrot to “Big Spender” by Shirley Bassey at the Great Wall of China, she “danced herself into a whole other realm,” Inaba said. “You were power, you were money, you were on it … You hammered that number into the ground.”

“Dancing With the Stars” airs Mondays on ABC at 8 p.m.