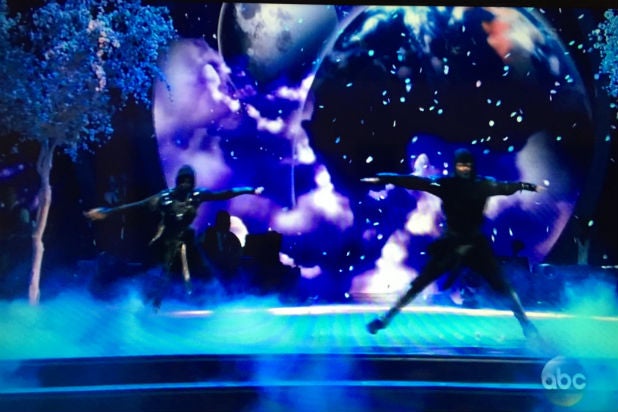 The odds were not in this “Dancing With the Stars” contestant’s favor on Monday night as 14-year-old “Hunger Games” actress Willow Shields was the latest to get the ax.

Season 20’s youngest contestant and dance pro Mark Ballas were ninja warriors for a futuristic jazz routine that failed to connect with the judges, possibly because their faces were covered throughout.

After delivering the crushing blow of rejection, host Tom Bergeron immediately transformed into a father figure to hug it out with Shields, who had consistently earned higher scores than competitors such as “Bachelor” star Chris Soules and “Shark Tank” personality Robert Herjavec.

Although injured Derek Hough couldn’t dance this week, he was present to give advice to partner Nastia Liukin and help with choreography as Sasha Farber stood in for him.

Meanwhile, the judges were the least of Rumer Willis’ concerns as she danced to impress her dad, Bruce Willis, who was a special addition to the ABC show when he joined his oldest daughter and partner Val Chmerkovskiy for rehearsals.

“I love seeing her happy like that,” Willis said. “Keep doing what you are doing. You guys are doing great.”

The “Die Hard” star has attended the live show three times so far during Season 20, but ex-wife Demi Moore has been there every week.

“As wholesome as apple pie. Can I have a slice please?” judge Bruno Tonioli later said of Rumer and Val’s foxtrot.

Also Read: 'Dancing With the Stars' Disney Night, See Which Contestant Gets the Boot

In a giant wig, furs and dodgy mustache, Noah Galloway and Sharna Burgess also wowed the judges with their 1970s style jazz, prompting Julianne Hough to say it was the most fun she’d had at the judge’s table.

“Dancing with the Stars” airs Mondays on ABC at 8 p.m.