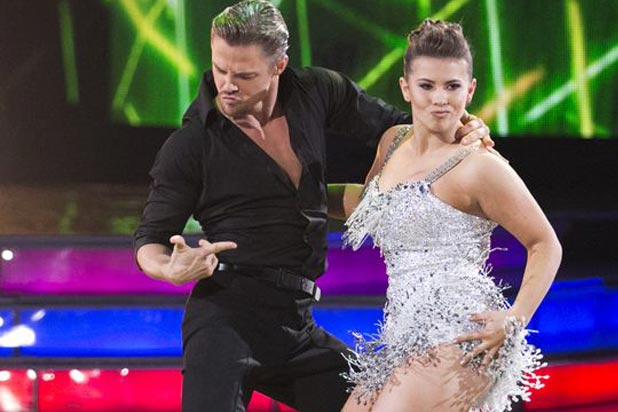 (Spoiler alert: Please don’t read on if you have not watched Monday’s episode of “Dancing With the Stars”)

And then there were three.

The race for the 21st Mirror Ball Trophy is down to the wire as “Dancing With the Stars” began its two-night finale on Monday.

But despite two consecutive weeks of earning perfect scores, Big Time Rush singer Carlos PenaVega and his partner, Witney Carson, were ousted from the competition.

“Well, first of all I thank God for this opportunity because it has been life-changing,” he told co-host Tom Bergeron on air.

Some fans reacted with horror to PenaVega’s elimination.

#TeamBrownSugar was eliminated, but Carlos left with a smile on his face & a new experience under his belt. #DWTS pic.twitter.com/G7RMg9zZY0

The frontrunner clearly seems to be Irwin, who performed a contemporary freestyle with partner Derek Hough that honored her late father, Steve “Crocodile Hunter” Irwin.

Wow #DWTS has me bawling yet again! Footprints in the sand…incredible! Bindi is so raw and beautiful! ❤️ — Christina Cindrich (@MissCindrich) November 24, 2015

If @BindiIrwin doesn’t win #DWTS, @realDonaldTrump might as well be President because I will be SO DONE.

Also Read: 'Dancing With the Stars' Career Bump: 11 Contestants Who Tangoed Their Way to Success (Photos)

And and partner Sharna Burgess roused the crowd with a group dance to “Larger Than Life,” his 1999 hit song with the Backstreet Boys.

That was a stunning jive from @nickcarter and @SharnaBurgess. I’m expecting him & @BindiIrwin/@derekhough to be the final two. #DWTS — Jessica Radloff (@JRadloff) November 24, 2015

Once a boyband fan, always a boyband fan. Be sure to vote for @nickcarter on #DWTS tonight! https://t.co/rL5utK1njH pic.twitter.com/ZXIwoChnF1

But there seemed to be a lot of online hostility toward Skarlatos, the 23-year-old U.S. serviceman who helped subdue a gunman on a French train. His dances with pro Lindsay Arnold — they were the only couple to not receive perfect scores from the judges on Monday — had some fans scratching their heads.

Alek does not deserve to be in the final over Carlos. Not in the slightest. He’s NOTHING compared to Nick, Bindi, and Carlos. NOTHING. #DWTS — ash (@ashleyray9_) November 24, 2015

#DWTS Dear Lord,who is voting for Alek?!?He’s kicking out people who are more deserving of being in the top 3…@TheCarlosPena & @alexavega