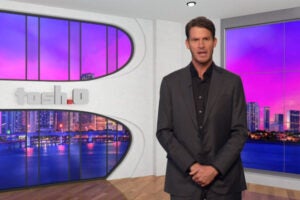 Reality competitions are currently neck-and-neck in key demo, with the singing show drawing more overall eyeballs than the dancing one

Kaitlyn Bristowe won “Dancing With the Stars” last night, but ABC may not end up the (sole, more likely) ratings winner on Monday.

With ESPN’s “Monday Night Football” airing on ABC in the large Los Angeles media market, ABC’s early Nielsen numbers (below) may be slightly artificially inflated. Plus, NBC’s primetime ratings average of 0.74 is dangerously close to rounding up to a 0.8, which is what ABC currently has from 8 p.m. to 11 p.m. last night.

Either way, NBC appears to have won the tight total-viewer battle, with “The Voice” outdoing “DWTS” in that more general and all-inclusive metric. The two reality competitions are (currently) tied in the key ratings demo of adults 18-49, with both posting an initial 0.9 over their head-to-head two-hour time slot.

The CW finished in last place again last night, which is pretty much the norm as far as broadcast-TV rankings go. We’re mentioning it up here though because The CW began airing “The Gilmore Girls” revival (mini)series on Monday. The four-parter originally aired on Netflix.

The original “Gilmore Girls” started on The WB, which eventually became The CW. The series wrapped up its run on the rebranded broadcast network.

The CW was seventh in ratings with a 0.1/1 and in viewers with 478,000. Those were the averages from the “Winter” episode of “Gilmore Girls: A Year in the Life.”