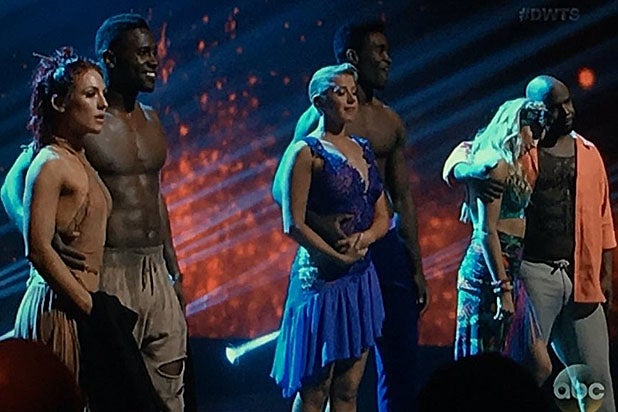 With only six contestants left on Season 22 of “Dancing With the Stars,” the pressure was on for all the contestants Monday night.

And the challenges kept on coming as the pairs had to dance to two songs and compete in the Judges’ Team-Up Challenge — where two stars were paired together and coached by one of the three judges.

“Full House” actress Jodie Sweetin had been a star back on the rise, but sadly that all came to a crushing end.

Her euphoric jive to “Something’s Got a Hold on Me” by Christina Aguilera sparked strong praise from the judges. “This was your best dance ever,” Carrie Ann Inaba said, while Len Goodman told her “you have grown and you have flown. … I have not seen any dance that has made me so happy.”

However, even a perfect score of 30 wasn’t enough to make up for past blunders, and Sweetin ended up on the chopping block.

“I got to go out on all 10s,” the ever-cheerful former child star gushed when she was told the bad news. She added: “And I start production on ‘Fuller House’ tomorrow.” So at least she will have plenty of work to fill her spare time with.

After a rough couple of performances, Nyle DiMarco bounced back to the top of the leader board last week — and completely blew away the judges Monday night without having to utter a sound.

The deaf “America’s Next Top Model” alum danced a section of his pasodoble in complete silence to “give people a perspective on what it is like to dance without sound.”

Also Read: Paige VanZant Talks Up 'Dancing With the Stars' Chances: 'Hey, I Could Win This' (Video)

After Nyle took the stage to “Victorious” by Panic! at the Disco with partner Peta Murgatroyd, Goodman said DiMarco was strutting out too much, “however, you come out every time, you dance with purpose and confidence — and the silent section gave us a glimpse of what you do every week.”

Meanwhile, Bruno Tonioli said it was mind-blowing and was like watching “five men dancing to the beat of a single heart.”

“You really are educating us,” Inaba added.

With the recent eliminations of Von Miller and Doug Flutie, Antonio Brown is the last remaining NFL star this season — but he was warned he was still in jeopardy. The Pittsburgh Steelers wide receiver danced the Viennese waltz to “Love on the Brain” by Rihanna and was told it was “dashing, classy, romantic” by Tonioli.

UFC star Paige VanZant told TheWrap that she recently realized, “Hey, I could win this,” and she was one step closer on Monday following a Viennese waltz that was described as both “chilling and thrilling.”

Also Read: 'Dancing With the Stars' First Elimination: One Contestant Cries, Another Is Sent Home (Video)

See video of Nyle and Peta’s dance below.

'Dancing With the Stars' Has Stiff Competition: 5 TV Boners (Videos)

In honor of Antonio Brown’s “blood flow” admission on the dance competition, TheWrap looks back at TV’s other major boners