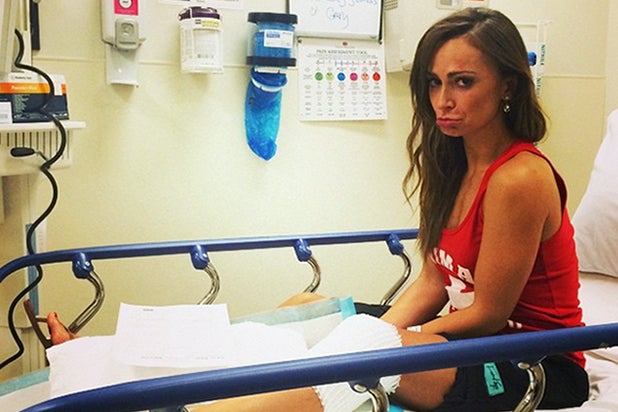 Karina Smirnoff couldn’t perform on Monday night’s episode of “Dancing With the Stars” after injuring herself during rehearsal. She was scheduled to appear in a big number onstage even though her partner Randy Couture was eliminated in the third week of the ABC competition.

Smirnoff posted an Instagram photo of herself with a pouty face while recovering in the hospital bed with a brace on her knee.

Also read: ‘Dancing With the Stars’ Week 4: Alfonso Ribeiro Does ‘The Carlton,’ Someone Goes Home (Video)

“So sad I’m not able to perform tonight on the show,” she wrote in the caption. “Got hurt yesterday rehearsing. Now, some TLC and I’ll be back stronger then ever! Thank you for your support, guys.”

It’s not the first time Smirnoff has injured herself on the hit ABC dancing show. As TheWrap previously reported, she strained her neck while attempting a flip during rehearsal with her Season 16 partner, NFL player Jacoby Jones. Smirnoff reportedly landed on Jones and fell, straining her neck and suffering jaw tissue damage and suffering a misalignment of her jaw.

Also read: Karina Smirnoff to Perform on ‘DWTS’ After Hospitalization

“Dancing With the Stars” airs Monday night at 8 p.m. ET on ABC.