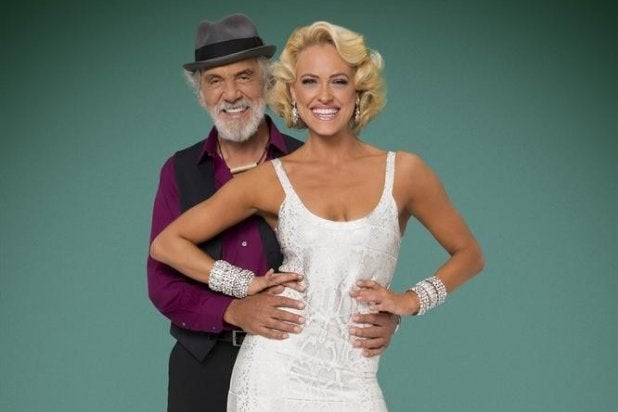 (Spoiler warning: Do not read on if you have not yet seen Monday’s “Plugged/Unplugged Night” episode of ABC’s “Dancing With the Stars.”)

It was down to the final five in the penultimate week of ABC’s “Dancing With the Stars.” After last week’s shocker kept Tommy Chong over Lea Thompson, he was back at it again. But could his fanbase elevate him past the four couples that have come to dominate the competition week in and week out?

This week they had to tackle two different dances performed to the exact same song. There was no mistaking where the judges were leaning as far as their preferred Top 4. They gave nothing but 9s and 10s to Sadie Robertson, Alfonso Ribeiro, Bethany Mota and Janel Parrish, including two perfect scores on the night.

As for Tommy Chong, he got 7s across the board for his first dance, followed by an even split of 8s and 9s for his second. It wasn’t even close, but that’s nothing new. The 76-year-old Chong has consistently been one of the lower-scoring celebrities on the season, but his charm and grace have helped him with the public vote. Finally this week, though, it wasn’t enough.

Tommy Chong and his professional partner Peta Murgatroyd were eliminated, leaving one of the most balanced final fours the show has ever seen. Just look at the last two weeks as proof. This week, Mota and Parrish earned perfect scores for one of their dances, while last week it was Ribeiro and Robertson who showed perfection in the judges’ eyes.

It truly is anyone’s game at this point.

It all comes to a close next week. “Dancing With the Stars” first airs in its usual slot, Monday at 8 p.m. ET on ABC. On Tuesday, a special “Road to the Finals” episode airs at 8 p.m. ET, followed by the 19th season finale at 9 p.m. ET.