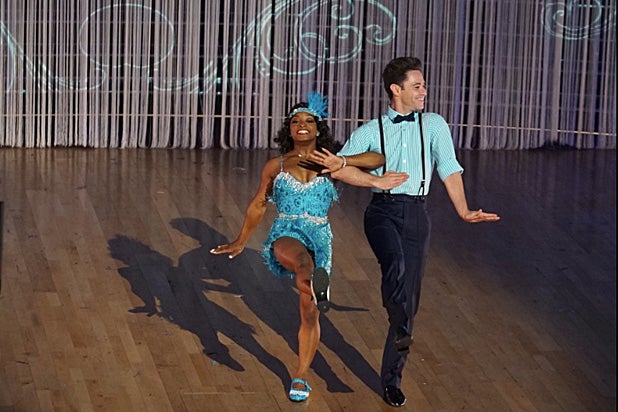 (Spoiler alert: Please don’t read on if you have not watched Monday’s episode of “Dancing With the Stars”)

Not every Hollywood story has a happy ending, and that was doubly so Monday night when two unlucky contestants were voted off “Dancing With the Stars.”

It was a “night at the movies” on the ABC reality contest Monday, as they danced for immunity from double elimination by evoking popular Hollywood genres.

“La La Land” choreographer — not to be confused with the singer and “This Is Us” actress of the same name — acted as guest judge, having prior history on “DWTS” and “So You Think You Can Dance.”

In true Hollywood cliffhanger style, it all came down to a dance-off to see who was cut from the cast between Bonner Bolton and Nick Viall, with the former “Bachelor” star getting the boot.

Also eliminated was Nancy Kerrigan, who was in the bottom two last week but was determined to redeem herself with the romance movie-themed dance to “Pretty Woman.” Bruno Tonioli told the Olympic ice skater that she had taken last week’s comments and grown, as she praised the “cheekiness” in her performance, but sadly it wasn’t enough.

“You came out guns blazing and firing from the hip,” judge Len Goodman told Bolton, pulling out every cowboy pun he could muster.

Simone Biles went back in time for a silent movie Charleston, which was packed full of “goofy fun,” Tonioli told her. “It was very appropriate for the time — and how do you know, you weren’t even there … very entertaining, very funny.”

For what would end up being his last dance on the show, Viall was all action as he played a spy for an Argentine Tango. Carrie Ann Inaba said while there was missteps, “she really loved the connection” between Nick and Peta.

“I loved the storytelling,” Moore continued, adding that she thought Viall was “excellent.”

NFL star Rashad Jennings attempted to terrify the judges with a Paso Doble to an intricate horror theme about a serial killer who likes to dance with the bodies of his victims in the woods. OK, yep, we’re creeped out …

“Thunderbolts and lightening, very, very frightening. The music was epic, and so was the dancing,” Goodman said. “It’s another solid performance.”

Fifth Harmony’s Normani Kordei battled through pain and injury to perform an Argentine Tango, which scored her the Academy Award for best dance of the evening, according to Tonioli.

“Not only are you strong and fierce, but you are elegant,” Inaba gushed, before Kordei went on score immunity from elimination.