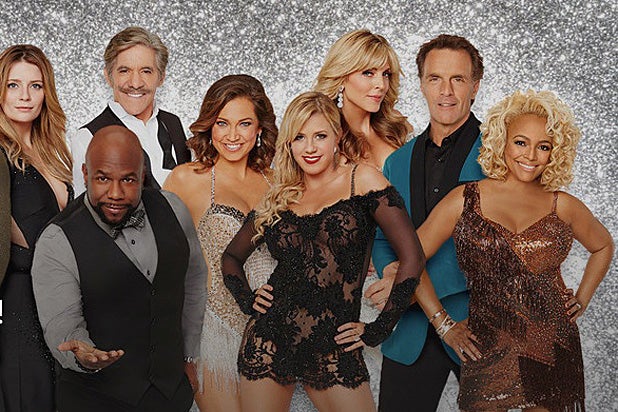 (Spoiler alert: Please do not read on if you haven’t watched Monday’s season premiere of “Dancing With the Stars”)

The 22nd season of “Dancing With the Stars” premiered on Monday, and the latest cast exploded out of the gate — with some winning shining praise, and others getting brutally slammed by the judges on opening night.

Once again, “Dancing with the Stars” is hosted by two-time Emmy Award-winner Tom Bergeron and Erin Andrews, while contestants are judged by judges Len Goodman, Bruno Tonioli and Carrie Ann Inaba.

Having recently won a $55 million lawsuit against a hotel chain stemming from a peeping video, Andrews was back to introduce the new cast, which includes “The O.C” actress Mischa Barton and talk-show host and Fox News correspondent Geraldo Rivera.

However, it was former “The Facts of Life” actress and current “Real Housewives of Atlanta” personality Kim Fields who was first to perform.

“What I see is a whole lot of charisma in a little tiny package,” Inaba told her.

VanZant almost cried after her performance, and admitted she “cries at every fight … everyone identifies me as a fighter, but I am a girl too,” she told Andrews.

Flutie proved that he had better footwork on the football field than he does on the dance floor as he did a foxtrot to Boston anthem “Sweet Caroline,” in a tribute to his New England fans. Inaba tried to soften the blow of her criticism, saying: “Well, the good news is you did it. I love your sense of commitment,” adding: “people love an underdog.” Something no one ever told him when he played for Boston College or the Patriots!

Barton was another contestant who Inaba said some of the movements “didn’t feel comfortable in your skin.”

Unfortunately for the actress, Goodman wasn’t nearly as kind, telling her: “It’s not in my nature to be nasty, but that wasn’t a dance — it was a walk,” adding that the “fire and flair” of a Tango were all missing. Barton later admitted to Andrews “I have no clue what I am doing,” but took the criticism and poor scores with grace.

Rivera described himself as the “only Puerto Rican who can’t dance,” in a performance that Tonioli described as “minimalistic … don’t give away too much, too soon.”

Donald Trump’s ex-wife Marla Maples revealed that most people still think of her as “that girl who was married to Donald.”

“I really get tired of those hair questions about Donald, I think his hair looks fine!” she said, before aptly dancing to “Diamonds Are a Girl’s Best Friend,” which won sparkling praise from the judges.

Also Read: What's Next for Bindi Irwin After 'Dancing With the Stars' Win?

“America’s Next Top Model” winner Nyle DiMarco marks the first male deaf contestant on the show (Marlee Matlin was the first female on Season 6), and Goodman called his dance “terrific … it just got better and better,” while Tonioli marveled over whether he was real or a fantasy. “You could be ‘America’s Next Top Dancer,'” he told him.

Miller helped Peyton Manning close his NFL season with a Super Bowl ring, and he closed the show in style on Monday bursting out to Flo Rida’s “My House,” after sharing his chicken obsession with his far shorter partner, Witney Carson.

Check out the full list of cast members and their professional dance partners below:

See video from Monday night below.