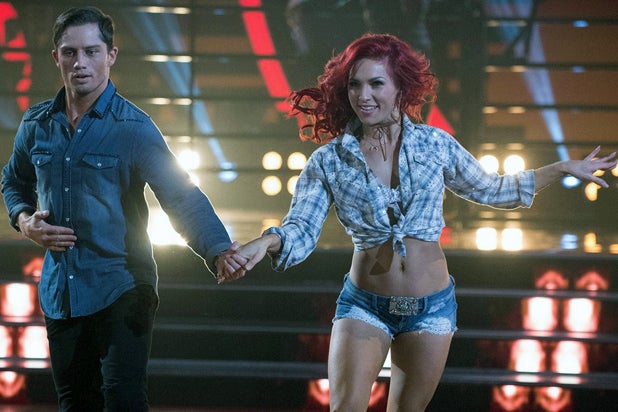 Season 24 of “Dancing With the Stars” kicked off with a bang last week with an accidental crotch-grab by Bonner Bolton and a Twitter faux pas aimed at Nancy Kerrigan.

So the bar was set high on Monday for the 401st episode of ABC’s reality dancing competition.

We’re barely a week into the new season but already one pro has been sidelined by injury, as Maksim Chmerkovskiy sat out the night following a calf injury and left “Glee” actress Heather Morris with substitute Alan Bersten.

It always sucks to be first, and on Monday it came down to Chris Kattan and Charo on the chopping block, with the comedian not having the last laugh and getting eliminated.

Pro partner Witney Carson “was an amazing inspiration and I couldn’t have done it without her,” Kattan said in his farewell speech.

Earlier in the show, former Olympic ice skater Kerrigan got tons of praise from the judges even though she said she hated getting compliments (well, she’d better get used to them). “I am just out of my comfort zone trying to be sexy,” Kerrigan told co-host Erin Andrews.

Reality star and “Real Housewives” alum Erika Jayne’s raunchy performance got judge Bruno Tonioli fired up. “It was a sex trot on a hot set of wheels … the bad girl’s done very, very do well, chain them up and spit them out,” he told her. Alrighty then, moving on.

Pint-sized Charo was in familiar territory with the Paso at least, as the Spanish-American actress returned to her roots. “The Paso Doble is the story of my life,” she said. “Tonight I wear a red dress in honor of my mother.”

“I love you, I worship you — even though you were a step ahead of Keo the whole time, it was like a solo even though it was supposed to be a duet,” gushed smitten judge Carrie Anne Inaba.

“It had fire, flair, passion,” Len Goodman continued. “You came out there and gave me great joy.”

“Bachelor” star Nick Viall wasn’t getting any roses from Goodman, however, “this was far too hectic, it was madness on the floor,” he told him, prompting boos from the audience. “There was no control.”

Teamed up with stand-in partner Bersten, Morris added a hip-hop element to the jive, which didn’t sit well with Goodman either. “I don’t want to see that out here,” he said. “It was a waste, come out and jive — you’re too good a dancer for that.”

Chmerkovskiy did make a brief appearance, at least, revealing that he is having a procedure on his calf on Tuesday.

Co-host Tom Bergeron slipped in a cheeky joke when he said former professional bull rider Bolton and partner Sharna Burgess have “hands down the best chemistry” on the show.

“I’d like to pull some romance out of my saddle bag and show America just how good a cowboy can be on that dance floor,” Bolton said ahead of his Viennese Waltz.

“I feel like everyone else, I am watching something unfolding right in front of my eyes,” Julianne Hough said, fueling the rumors of an on-set love affair.

However, while Goodman thought their frame was very good, he added, “you’re the big, butch bull rider and it was a little bit timid, it was all personal.”

Next up, Olympian Simone Biles turned up the heat, “smoldering Simone, you burned up the floor and set off all the fire alarms,” Tonioli told her.

“Saturday Night Live” alum Kattan was criticized for being too stiff last week, and on Monday he struggled to overcome having broken his neck a few years ago. “Part of what I used to do was physical comedy, but now I can’t,” he said.

While his story is a brave one — his performance wasn’t great. “But [it] was better than last week,” at least, according to Goodman and Hough.

Fifth Harmony singer Normani Kordei was straight off a flight from Asia after touring with the girl group, but she didn’t let it show. “There was no larking about, and I thought it was terrific,” Goodman told her.

“That was no jet lag, that was jet set,” Tonioli added.

NFL player Rashad Jennings won praise from Hough for “being the man … just keep being you and keep rocking it,” she said, while Tonioli called it “Fifty shades of Viennese Waltz.”

“The A-Team” star Mr. T came out fighting, literally, after having a rough premiere last week. “Practice won’t make us perfect, but it will make us better,” he vowed.

Mr. T. performed the Paso Doble in a boxing ring and the bizarre stunt was called it “big, dangerous, full of menace,” but it was a “little bit internalized … the intention was there — extend it.”

“Dancing With the Stars” airs Mondays on ABC.

The celebs stop by TheWrap for an interview and photo shoot

Chris Kattan and Witney Carson, "Dancing With the Stars"

Photographed by Diana King for TheWrap