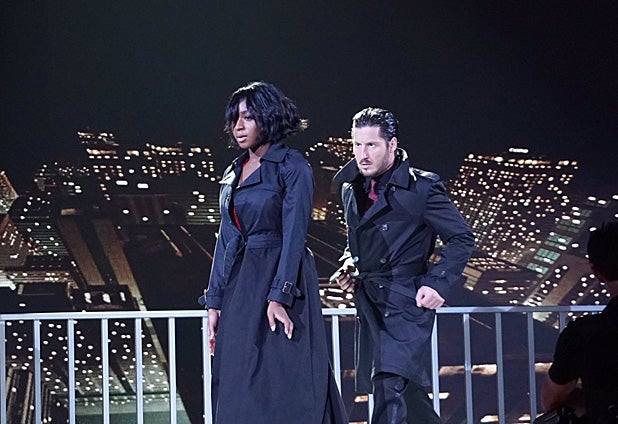 It came down to the wire Monday night on “Dancing With the Stars,” as the contestants went into the semi-finals facing the tough “Judges’ Challenge Round.”

And while it was between the last four hopefuls, the resulting elimination was still a surprise to everyone in the studio.

The judges all rose with their hands over the mouths, and co-host Erin Andrews said, “I am in absolute shock,” when the name was read out loud…

… and that was Olympic gymnast Simone Biles, who will now be leaving Season 24 of the ABC dance contest.

“I am just thankful to be in this competition. I’ve learned a lot about myself, and I’ve matured,” the 20-year-old gold medalist said.

Earlier in the night, Fifth Harmony singer Normani Kordei had a challenge from the “toughest judge” Len Goodman, who demanded that she take him back in time with her Viennese Waltz.

Despite “a little incident” with the standing spin, Goodman was full of praise. “You did exactly what I asked for,” he said.

Former Chicago Cubs player David Ross got a cheeky challenge from Julianne Hough — “to get his booty under,” with the help of some lemons. Yep, really.

The juicy trick worked as Hough proclaimed “you squeezed your lemon! I am so proud of you guys.” Carrie Anne Inaba went on to tell Ross that he “broke through last week.”

Ross will make his debut on another Disney-owned channel as an ESPN analyst this week on “Wednesday Night Baseball,” when the Boston Red Sox visit the St. Louis Cardinals.

Biles has been on an emotional roller coaster all season, and Monday was no different, as the tears flowed before Inaba said she “wanted to find the other side of Simone that’s not so perfect … and let those emotions show through.”

Bruno Tonioli said she “let it rip but didn’t miss a step — and nailed it,” he gushed. “You went all Tina Turner there.”

After finally letting her guard down — and introducing her raunchy alter ego Zoe — Biles nailed a perfect score (before getting the boot, of course).

NFL running back Rashad Jennings was told by Tonioli that “he has charisma but is still a bit rough around the edges. I know you can catch a ball — but can you catch my challenge?” he quipped. “The Rhumba, the toughest challenge for a man.”

The result seemed to be a touchdown with the judges, as Goodman said: “I liked the light and shade about it — it was fast, it was slow. It was hard, soft, big, small. I love that feel of it,” he praised, adding that Jennings had “beautiful fluidity despite a few funny feet.”

The contestants went on to reveal which people in their lives gave then their greatest strengths in a quintessential pulling at the heart strings segment on “DWTS.”

The remaining contestants will be back May 22 for the Season finale.