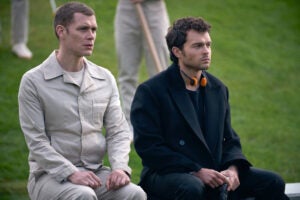 On Monday, hosts Tom Bergeron and Erin Andrews split with the ABC series, which is going in “a new creative direction”

ABC’s “Dancing With the Stars” waved goodbye to hosts Tom Bergeron and Erin Andrews on Monday. That’s nothing compared to the number of viewers “DWTS” has bid farewell to over its remarkable run of 28 seasons — and counting.

Fans didn’t know it at the time, but that cycle was the final one hosted by Bergeron and Andrews.

Also Read: Tom Bergeron, Erin Andrews Out as Hosts of 'Dancing With the Stars'

“Just informed [‘Dancing With the Stars’] will be continuing without me,” Bergeron tweeted on Monday. “It’s been an incredible 15 year run and the most unexpected gift of my career. I’m grateful for that and for the lifelong friendships made. That said, now what am I supposed to do with all of these glitter masks?”

“Tom Bergeron will forever be part of the Dancing with the Stars family,” ABC and BBC Studios said afterward in a joint statement. “As we embark on a new creative direction, he departs the show with our sincerest thanks and gratitude for his trademark wit and charm that helped make this show a success. Erin will also not be returning, and we appreciate all that she brought to the ballroom. Fans have been rooting for her since she originally competed as a contestant back in 2010, and her signature sense of humor has become a hallmark of the show.”

Bergeron had been with the show since it premiered, while Andrews, a former “Star,” came in as his co-host in Season 18. With both of them now out and no new replacement hosts named yet, it’s hard to say what this “new creative direction” will be — or if it will help turn around the show’s downward direction in Nielsen numbers.

Also Read: Ratings: 'Dancing With the Stars' Settles for Its Smallest-Ever TV Audience for a Finale

The “Dancing With the Stars” heyday, from a ratings standpoint, came way back in the third season, when the series averaged a whopping 5.4 rating among adults 18-49. From there, the series dipped to a 5.0 rating the following season but rose to a 5.2 for Season 5, which happened to be the show’s most-watched year, averaging a massive 20.604 million total viewers.

It was the second — and final — time the series averaged more than 20 million viewers per week. To be clear, we’re not suggesting “Dancing With the Stars” should be posting the same numbers it did a decade ago — when streaming platforms didn’t distract from television — but the Mirrorball Trophy could use a little polish.

Once a phenomenon, “DWTS” is barely a Top 40 broadcast series these days in terms of total viewers. In the demo, “Dancing” doesn’t waltz into the Top 60.

Also Read: 'Dancing With the Stars': And the Season 28 Winner Is...

Below, you’ll find the average rating and total-viewer tally for each season of “Dancing With the Stars.” The numbers include all original episodes and specials that aired during that cycle and are inclusive of one week of DVR viewing.

On Tuesday, the “GMA” Twitter handle teased “an exclusive announcement about the new season” on Wednesday’s “Good Morning America” episode.

We expect to find out the reality show’s “new creative direction” — and new host(s) — then.

TOMORROW ON @GMA: @DancingABC is back! And we'll have an exclusive announcement about the new season ONLY on GMA! #DancingOnGMA pic.twitter.com/2tCN3qCmao