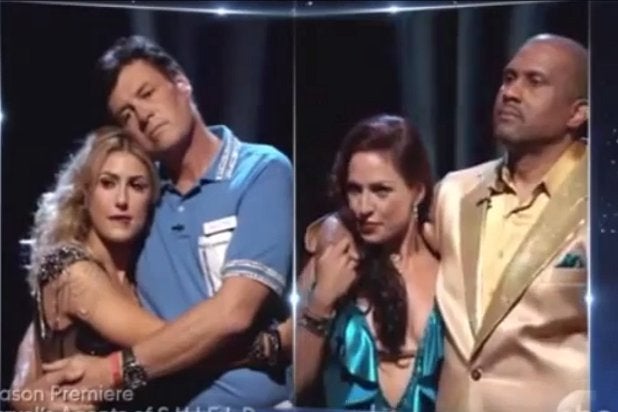 (Spoiler alert: Do not read on if you have not yet watched Tuesday’s Week 2 elimination episode of “Dancing With the Stars.”)

Michael Waltrip is a champion on the racetrack, but he found himself in danger of elimination going into Tuesday night’s elimination episode of “Dancing With the Stars.” With 24 points, the NASCAR driver had the lowest judges’ score of Monday night’s performances, so he needed his racing fans to rally behind him with their votes.

Above him was a three-way tie between Tommy Chong, Betsey Johnson and Tavis Smiley. Out of a possible 40 points, they each scored 28.

Johnson and Chong were both sent to safety right away, proving that America has a lot of influence over the results of the show. Taking their place in the bottom alongside Waltrip and Smiley was “Duck Dynasty” daughter Sadie Robertson, who had a decent showing with the judges, earning 31 points for her jazz routine, though that was down from the 34 points she earned in Week 1.

“Duck Dynasty” and NASCAR fans rallied enough in support of their favorite competitors, leaving the lesser-known Tavis Smiley the odd man out, and the second person eliminated from the competition.

The talk show host admitted that his busy schedule left him distracted, resulting in a sub-par performance. Nevertheless, he called his time on ABC’s reality staple “a wonderful experience.”

“Dancing With the Stars” shifts to a once-a-week schedule, Mondays at 8 p.m. ET on ABC.