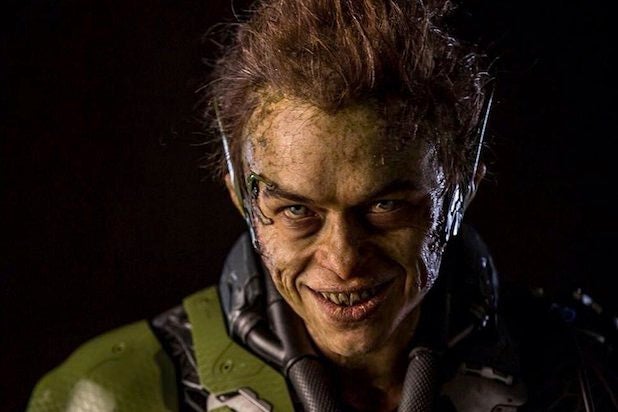 A new image (above) of the bad guy who takes on Peter Parker (Andrew Garfield) with fellow troublemakers Electro (Jamie Foxx) and Rhino (Paul Giamatti) gives a very detailed look at the updated character, previously portrayed on the big screen by James Franco and Willem Dafoe.

While “Spider-Man” director Sam Raimi‘s interpretation of the classic villain was more mechanical, director Marc Webb has given DeHaan very goblin-like facial features, including a pointy nose, rotting teeth, green-tinted skin, and hair that looks like it might fall out by the time the third installment of the Sony franchise rolls around — providing the Green Goblin makes it out of this one alive.

“The Amazing Spider-Man 2,” which revolves around Oscorp pumping out genetically-engineered supervillains to destroy New York City’s friendly neighborhood webslinger,  hits theaters on May 2.