Daniel Battsek has stepped down as president of Miramax, less than a month after parent company Disney said it would scale back the number of releases from its arthouse division.

"With the change in direction at Miramax, we have reached a mutual agreement with Daniel that he will leave his post as president, effective January 2010," Rich Ross, newly appointed chairman of the Walt Disney Studios, said in a release Friday.

Besides downsizing the Miramax division’s schedule, Disney also folded much of its operations into the studio’s larger film group in early October. At the time, Disney said Battsek would continue to oversee all aspects of creative, development, production and business and legal affairs out of New York.

But Disney cut the division’s workforce by 70 percent down to 20 people earlier this month, and plans to shutter Miramax’s New York headquarters by the end of the year. Miramax released six movies last year, and plans on only three titles per year going forward. 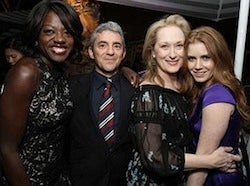 "During his 18 years of service, he has brought some very prestigious and award-winning films to the studio from ‘Calendar Girls’ to ‘The Queen’ to ‘No Country for Old Men,’" Ross said. "We wish Daniel the very best on his future endeavors."
While those titles — along with the Oscar-nominated "Doubt" — are to his credit, he most recently oversaw such box-office flops as "The Boys Are Back," "Extract" and "Cheri."
More from TheWrap on Miramax/Disney:
Miramax Shrinks at Disney, Oct. 2.
Rich Ross Tapped to Run Disney Studios, Oct. 5.
More Indie Shrinkage: The Film Dept. Teams With Weinstein, from Oct. 29.
x
Looks like you're enjoying reading