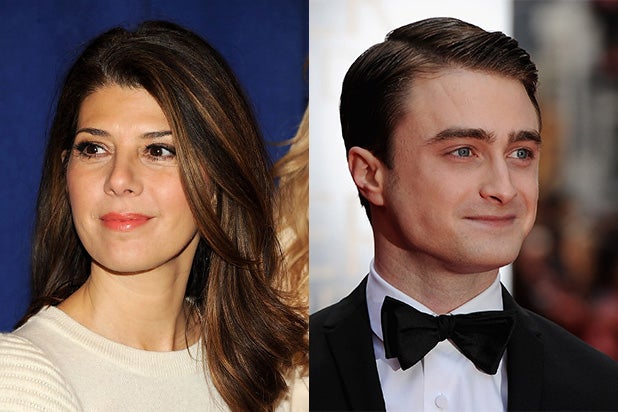 Daniel Radcliffe and Marisa Tomei have quietly joined the cast of Judd Apatow‘s next comedy “Trainwreck,” as evidenced by photos snapped on the streets of New York of the two actors hard at work filming a scene with some furry co-stars.

The comedy stars Amy Schumer, Brie Larson, Bill Hader, Tilda Swinton and Ezra Miller, among others. There’s no word on what characters Radcliffe and Tomei will play, though the set pics seem to suggest they’re romantically involved somehow, and he may be a professional dog walker.

See video: Daniel Radcliffe Is a Classic Romantic Comedy Lead in the Latest ‘What If’ Trailer

The director, for his part, has taken to Twitter to jokingly deny the photographic evidence. “Not true! He was just walking his dogs,” Apatow tweeted in reply to a fan speculating on Radcliffe’s new gig.

“Trainwreck” is currently filming and will be released on July 24, 2015. Radcliffe then appears in Fox’s “Victor Frankenstein,” out October 2, 2015.

“@danradcliffecom:Dan to cameo in Trainwreck? READ: http://t.co/gGW5o43HIB pic.twitter.com/D2XcNoHeEU” Not true! He was just walking his dogs