If a “Harry Potter” reboot ever does happen, Daniel Radcliffe has some ideas on what part he’d like to be cast in this time around. Spoilers: it’s definitely not Harry Potter as an adult, or even any of the core kids from the franchise.

During an appearance on “Game Night” with Josh Horowitz’s “Happy Sad Confused,” Radcliffe and his “Miracle Workers” costars all mused on who’d they play, if given the chance. Karan Soni, who plays The Gunslinger in the latest season of the show, admitted he’d like to be Hermione, because “that’s the character I related to the most.”

Geraldine Viswanathan noted that she thinks she’d make a great Hagrid, to which her costars readily agreed. “Yeah, you love animals!” Soni exclaimed. And then it came down to the big one: Daniel Radcliffe. According to the actor, if he could play whoever he wanted in a “Harry Potter” reboot, it’d be one of two Marauders.

“I would probably want to go with like, Sirius or Lupin,” Radcliffe said. “Those were always the two characters that I was like ‘They’re great.’ And also like, I’m obviously biased by my experience of filming those scenes, with those people, and they’re like some of my favorite memories.” 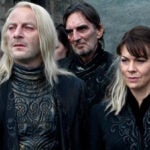 That all being said, this was mostly just hypothetical. Beyond the rest of the “Fantastic Beasts” film franchise, no “Harry Potter” sequel movies or series are currently in the works, despite rumors that swirled earlier this year.

Radcliffe himself isn’t even confident that a full cast reunion is happening for the first “Harry Potter” film’s 20th anniversary later this year. Warner Brothers did not respond to TheWrap’s request for comment on any anniversary plans.

“I’m in the Dominican Republic at the moment filming, and then I’m going to be busy, kind of working on bits and pieces until the end of the year,” Radcliffe said in July. “So yeah, I don’t know. I’m sure there will be some sort of celebration, but I don’t know if we will be getting together or anything. I’m sorry if that’s a bit of a disappointment to anyone.”

So remember, while it’s fun to cast hypothetically, Dumbledore said it best: “it does not do to dwell on dreams, and forget to live.”