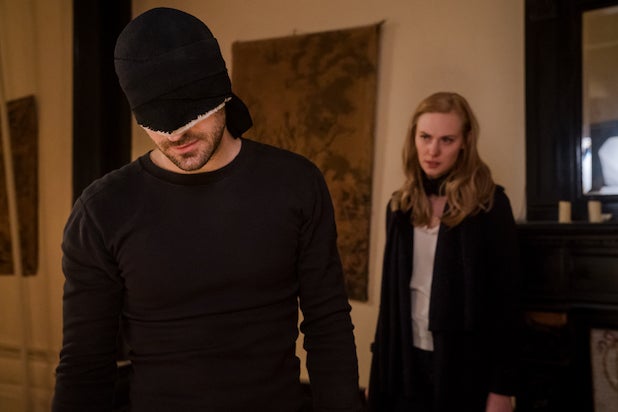 In Season 3 of “Marvel’s Daredevil,” we find the Hell’s Kitchen hero both physically and mentally broken, completely questioning his faith in, well, everything.

“What was really fun for me, was to play a superhero who suddenly is questioning everything that he is and everything that he’s done,” star Charlie Cox told TheWrap in an interview ahead of Season 3’s release on Netflix.

“Suddenly he becomes a man who’s very angry, and very unhinged, and therefore very dangerous,” Cox added. Season 3 picks up right where “The Defenders” left off, and fans will remember that Matt was crushed underneath Midland Circle when it collapsed, and assumed dead.

Also Read: 'Orange Is the New Black' to End With Season 7

“To have a superhero who, in the past, has always kind of managed to pick himself up and put one foot in front of the other and ultimately do the right thing, we’re now presented with a man who’s capable of doing the wrong thing,” Cox continued. “And it almost feels like at times that he [is starting] to question whether he is a hero, or whether he himself is also a villain. I think he’s very loose and he’s capable of anything in those early episodes.”

New showrunner Erik Oleson took Matt’s “literal breaking” and added a mental and spiritual element to the physical, Cox said — which is right in line with what Oleson told TheWrap was the guiding principle for the entire season.

“On the writers room wall we posted the notion that ‘We can only be free if we confront our fears because our fears are what enslave us,'” Oleson said. “What every character is grappling with all season long is a fear.”

For Murdock, his fear is that nothing he did as The Devil of Hell’s Kitchen mattered. He believed that the heightened senses he gained as a result of the accident that blinded him were God’s way of telling him he had to use those abilities to make Hell’s Kitchen a better place. But at the beginning of Season 3, Murdock is embracing his inner demons, throwing away any notion he could have a normal life and also be The Devil.

“We talked a lot about how broken [Matt] was, from a mental standpoint and from a spiritual standpoint,” Cox said. “We talked about that and then we ran with it. So we find a man who’s kind of so broken, and so spiritually bankrupt and mentally, and confused about who he is and what he’s done… questioning everything and what that does to him, someone who has a religious background, is it makes him start to question the nature of God.”

Oleson added he wanted viewers to really feel what Murdock was going through this season. “I employed a host of tools to make the season experiential, as opposed to just telling the story from the outside,” he said. A physical representation of Matt’s questioning in Season 3 is in his choice of dress while Daredevil — or, The Devil. Instead of his red suit, he goes back to the black, homemade outfit he wore in Season 1.

“The main reason is that it was broken, you know, it was like ruined by the collapse of Midland Circle, but why he doesn’t go and get another one made was a really fascinating kind of character trait,” Cox said. “You know, what is it about Matt, what has changed in him that he doesn’t feel like he wants the suit anymore, or doesn’t feel like he deserves it?”

Cox said he enjoys exploring the narrative behind why Matt chooses or doesn’t choose to wear a superhero costume. Plus, it’s just plain more comfortable: “On a practical level, it’s a lot more comfy, it’s a lot more easy to put on, so I was thrilled for those reasons,” he said.

“And obviously, it’s no secret from the trailer now, that the benefit of having Matt in the old costume is that it allows someone else to kind of imitate him,” he added, hinting at the arrival of the iconic “Daredevil” adversary Bullseye.

Oleson credits Marvel TV for allowing him to take Murdock so deep into the depths of his own darkness.

“Marvel gave me a terrific amount of creative freedom and support,” he said. “I would go to them with ideas that I for sure thought that they were going to say ‘No Way Jose,’ but instead they turned around and said ‘Go for it.'” (This included an 11 and ½ minute prison breakout scene, which TheWrap will have more on later).