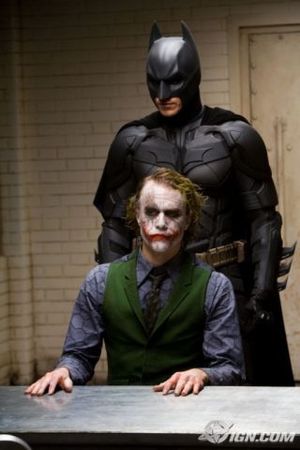 "The Dark Knight" just keeps going. The movie raked in another $75.6 million at the box office this weekend, according to Media By Numbers. The film is still in 4,300 theaters, one indication of pressing demand. Fans are lining up to see the film numerous times (two people in my house have seen it twice already), which is the rare kind of moviegoing behavior that makes for new entries in the Hollywood history books.
"Dark Knight" keeps racking up entries there. In just 10 days the movie has raced to a $314 million box office domestically, beating the previous benchmark held by "Pirates of the Caribbean: Dead Man’s Chest." This does not include the overseas box office, which is just getting started, taking in $41 million so far. It’s worth noting that Warner Brothers decided to skip Hollywood’s habit of opening big-budget, blockbuster movies simultaneously across the globe, in favor of a global roll-out led by the huge success in the United States. Does this mean the studio feels it has a handle on film piracy, once a subject of its obsession?

Final note: big black eye for 20th Century Fox, whose sci- film, "The X-Files: I Want to Believe," tanked with a $10 million opening. Most of the core, teenager audience was in diapers when the television series was a hit. And older fans? They went to see "The Dark Knight." (Sharon learns a lesson: wrote this at 10 am. Brain glitch means it’s only posted now.)