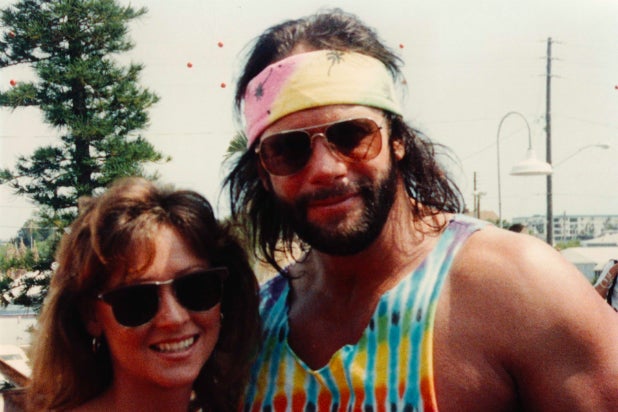 Finding the right actor for a role is always a difficult task. Finding the right one to be a body-double for a professional wrestler is a whole ‘nother thing. Producer Evan Husney told TheWrap he got “so lucky” when casting his reenactments for the Viceland pro-wrestling docuseries “The Dark Side of the Ring,” which debuts on Wednesday.

“Sometimes we just got so lucky,” he told us. “Obviously, we had people working super-hard to cast those people and to get it right, but at the same time we just got a lot of easy breaks.”

Like that time Husney found his “Macho Man” Randy Savage just cosplaying around New Orleans’ WrestleMania 34. Husney almost dropped his beer, which would have been another tragedy in the “Dark Side of the Ring” — a title his mom came up with, by the way — saga.

“I thought he’d come back from the dead,” Husney said, referring to Brandon Savage’s (yes, that’s the name he goes by) resemblance to the real “Macho Man,” who passed away in 2011 after suffering a heart attack and crashing his car.

So that was a big one they got out of the way early — but not every wrestling legend has tribute players. Fortunately, Toronto, where Husney and the team shot the series’ reenactment scenes, is home to a lot of independent wrestlers.

There, the “Dark Side of the Ring” production team tagged with the local Superkick’d school and promotion, which he says “had a roster that we kind of pushed to its limit.”

Fans may know some of Husney’s independent wrestlers-turned-extras, like Tyson Dux, who has worked with WWE on “205 Live.” Dux (pronounced “Dukes”) played Dutch Mantell in the Bruiser Brody episode, which was shot as the show’s pilot. (The real Mantell, an industry lifer, actually narrates every episode of the series save that one, since he’s in it. WWE legend Mick Foley handles the V.O. duties for the one-off.)

In the “Dark Side” series, Bruiser Brody was portrayed in flashbacks by two different wrestlers across two episodes: First, by Jocephus Brody, who performs in Billy Corgan’s NWA promotion, and then by Impact Wrestling’s Jake Something.

They were also pretty creative when it came to more normal-sized men and women.

Husney himself played World Class Championship Wrestling referee Rick Hazzard because, as he put it, “We have the same haircut.”

“Since we’re shooting in that sort of like very soft-focused, dream-like way, you can get away with a lot,” Husney said of his lone IMDb acting credit.

“Dark Side of the Ring” premieres Wednesday at 9/8c on Viceland with the “Macho Man” episode. Below is the full six-episode lineup.

April 10: “The Match Made in Heaven” — Art collides with real-life when the mythical love story between wrestling icons Randy Savage and Miss Elizabeth explodes beyond the ring with tragic consequences.

April 17: “The Montreal Screwjob” — In one of wrestling’s most infamous off-script moments, wrestler Bret Hart is stripped of his championship title through a backstage plot of betrayal that forever changes the sport.

April 24: “The Killing of Bruiser Brody” — Wrestlers relive the tragic evening in 1988 when they witnessed a locker room confrontation that resulted in the death of legendary wrestler Bruiser Brody.

May 1: “The Last of the Von Erichs” — The last surviving brother of the legendary Von Erich wrestling dynasty revisits the inescapable tragedy that plagued his once iconic family.

May 8: “The Mysterious Death of Gorgeous Gino” — For 30 years, the family of wrestling star Gino Hernandez believed his tragic death was a drug-related murder. Startling new revelations are revealed to his still grieving mother.