The pairing of TV comedy stars Tina Fey and Steve Carell in a Shawn Levy-directed rom-com produced enough chemistry to exceed pre-release projections and finish No. 1 at the domestic box office with $27.1 million this weekend, according to studio estimates.

The three-day tally for Fox’s "Date Night" narrowly edgedd out the week-two total for Warner’s "Clash of the Titans," with the 3D-converted epic bringing in $26.9 million over the three-day period.

Living separate lives on the NBC Thursday night schedule, comic actors Tina Fey and Steve Carell connected in the Fox romantic comedy "Date Night," premiering at No. 1 at the domestic box office Friday with $9.3 million, according to studio estimates.

The solid start put the $55 million film, directed by "Night at the Museum’s" Shawn Levy, slightly ahead of pre-release projections, as well as last week’s box-office champion, Warner 3D conversion "Clash of the Titans."

That epic remake, which stars "Avatar’s" Sam Worthington as the sword-wielding Greek god Perseus, dropped 68 percent from its premiere a week earlier with $8.4 million Friday. However, the $125 million  film is pacing for a three-day week two gross of around $27 million, which would place it No. 1 by the end of the weekend.

Overall, the domestic box office is on track to be nearly flat with the same April weekend last year, which featured an Easter holiday and a cumulative three-day gross of just under $130 million.

Here’s how the top 10 at the domestic box office finished Friday:

In third place in its third Friday of domestic release, DreamWorks Animation’s "How to Train Your Dragon" grossed $7.2 million, which was only a 35 percent week-to-week drop.

After all the sturm und drang DreamWorks has endured, given "Dragon’s" relatively unfavorable opening compared to the studio’s 2009 3D hit "Monsters vs. Aliens," "Dragons" is on pace to finish weekend No. 3 with over $131 million — a total that would put it less than $10 million off the pace set by "Monsters."

In fifth place, Lionsgate Tyler Perry film "Why Did I Get Married Too" dropped 71 percent, taking in just $3.5 million. Also produced for around $20 million, that film is set to have nearly $50 million in domestic gross by the time its second weekend is complete.

There’s a real clash of the titans heading to the box office this weekend, and the winner might be the mash-up of NBC’s Thursday-night comedy stars.

Warner’s 3D-converted Legendary Pictures collaboration “Clash of the Titans” debuted to a box-office-leading $61.2 million last weekend. But the poorly reviewed remake’s playability has been questionable, with the film dropping 18 percent from Friday to Saturday, and 35 percent from Saturday to Sunday.

Coming up against it: Fox’s romantic comedy “Date Night,” which debuts in 3,374 theaters in the U.S. and Canada. The $55 million Shawn Levy-directed comedy pairs “30 Rock’s” Tina Fey with “The Office’s” Steve Carell as a married couple who inadvertently fall into zany misadventures. 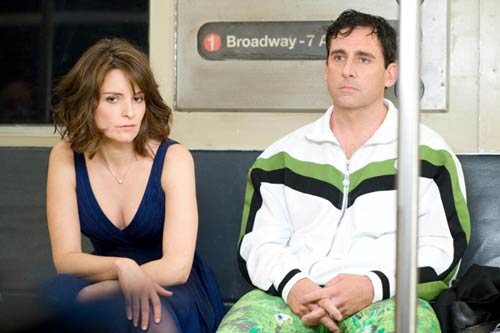 Its pre-release tracking suggests a three-day opening gross of somewhere between $20 million to $25 million.

With "Titans" expected to drop well north of the typical 50 percent week two decline, it’s believed that “Date Night” has a good chance to get to home plate this weekend as far as the domestic No. 1 spot is concerned.

Pedigree-wise, both of the film’s stars have proven they can open the live-action films they’ve headlined, with Carell’s “Get Smart” getting out to a $38.7 million start in 2008, and Fey’s moderately budgeted “Baby Mama” bowing to very respectable $17.4 million that same year.

Then there’s director Levy, who’s riding a streak of six straight money-making comedies, dating back to 2002’s “Big Fat Liar” and including both “Night at the Museum” movies.

“People have been circling this one for months,” one rival-studio executive told TheWrap. “In fact, people cleared the calendar for it. I wouldn’t be surprised if it overperformed.”

For his part, Fox executive VP of distribution Chris Aronson is taking a cautious tact towards predictions, noting that the clear release calendar was more a function of rivals moving their premiere dates up into the spring-break period.

“I’ll take a clear weekend anytime,” he said. “But $20 million would be the goal. We’re coming off the heels of a movie that opened to 60 some-odd million dollars. That’s formidable competition in the marketplace.”

“Who knows — tracking can be very wrong,” noted one rival-studio executive. “I wouldn’t be surprised if it did $35 million.”

The only other new significant release is Vivendi Entertainment family drama “Letters to God,” which will arrive in 897 venues.

Meanwhile, also poised to be a factor in its third week of release, DreamWorks’ “How to Train Your Dragon” has grossed $104.7 million through Wednesday, just $10 million less than comparable 2009 DreamWorks 3D effort “Monsters vs. Aliens” had during its first 13 days in the market.

With “Dragon” grossing $29 million last weekend, and declining only 34 percent week to week, a third-week domestic gross in the $20 million range is a distinct possibility.

The film’s playability has benefited from solid word of mouth (evidenced by an “A” CinemaScore grade) as well as great reviews (98 percent fresh on Rotten Tomatoes).

Also factoring into the top of the rankings will be “Tyler Perry’s Why Did I Get Married Too” from Lionsgate, which debuted to an impressive $29.2 million last weekend, but dropped off appreciably from day to day.

Other holdovers include Disney’s Nicholas Sparks-penned romance drama "The Last Song" starring Miley Cyrus, which has grossed $30.9 million in its first nine days of release. The $20 million movie has dropped significantly day-to-day since its $5.1 million spring-break premiere on Wednesday, March 31 and is not expected to generate huge numbers this weekend.