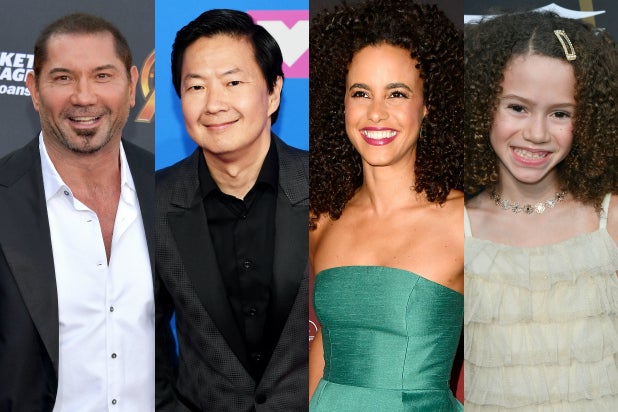 “My Spy” follows a hardened CIA operative (Bautista) who finds himself at the mercy of a precocious 9-year-old girl, having been sent undercover to surveil her family.

The film, currently in production in Toronto, is being directed by Peter Segal (“Get Smart”) from a script penned by Jon and Erich Hoeber (“Red”).

“MY SPY is the perfect vehicle to highlight Dave’s undeniable humor and charm, while continuing to stay true to his action roots,” said STXfilms chairman Adam Fogelson in a statement. “His father/daughter-like chemistry with Chloe Coleman is a true pleasure to watch, and we could not have asked for a stronger roster of funny and talented co-stars to round out the cast of this wildly entertaining film.”

STXfilms is a division of Robert Simonds owned STX Entertainment.

The studio is making it a point to get into the big-screen action genre. In addition to “My Spy,” STX has what it hopes will be a new franchise in “Muscle,” with Vin Diesel, as well as gritty cop action flick “17 Bridges” with Black Panther himself Chadwick Boseman.

Good Fear’s Chris Bender and Jake Weiner are producing “My Spy” alongside MWM Studios — the production company behind the National Geographic series “Genius” and the Oscar-nominated “Hell or High Water” — as well as Bautista, Segal and Jonathan Meisner.

Also Read: Jennifer Lopez's 'The Hustlers at Scores' in Talks to Move to STX Entertainment After Exiting Annapurna

STXfilms’ SVP of production Drew Simon and director of development Kate Vorhoff will oversee the production for the studio.