Bautista, in responding to one Twitter user’s question about why he wasn’t voicing the character who is set to appear in one episodes of the Disney+ series, the “Guardians of the Galaxy” star said he was never asked.

“Let’s start with I was never asked,” Bautista said on Monday, which prompted a confused response by his own “Guardians” director, James Gunn, who replied simply with “What.”

A rep for Disney did not immediately respond to TheWrap’s request for comment. 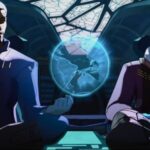 Also Read:
Marvel’s ‘What If…’ Trailer: T’Challa Joins the Guardians of the Galaxy and Peggy Carter Becomes Captain Britain (Video)

“What If…” is an anthology series that imagines alternate timelines for MCU characters, including Peggy Carter (Hayley Atwell) taking the super-soldier serum and becoming Captain Britain, and T’Challa (Chadwick Boseman) getting picked up by Yondu (Michael Rooker) instead of Peter Quill (Chris Pratt) and leading the Guardians of the Galaxy.

Bautista isn’t the only one who is not voicing his live-action counterpart. Chris Evans, Brie Larson, Scarlett Johansson and Tom Holland are among those who did not lend their voices to their animated characters.

Jeffery Wright voices the omnipotent The Watcher, who serves as the series’ narrator.