A Dave Chappelle fan who believes he was anonymously mentioned in the comedian’s latest standup special “Equanimity”  has written an open letter to express his disappointment.

In a Medium post, Tyler Foster writes that the comedian refers to a letter that Foster sent him, following a March 2016 performance which Foster says opened with 20 minutes of transphobic material. Foster said the material was “regressive, exclusionary, and cruel.”

In his latest special, Chappelle referenced a fan letter he received that made him “feel bad,” adding “I didn’t feel bad about what I said, you understand, I felt bad that I made someone else feel bad.” Chappelle said he wasn’t sure which joke upset him — “I have so many transgender jokes” — but that he had a hunch it was a bit about Caitlyn Jenner appearing nude in Sports Illustrated.

Foster isn’t positive it is his letter Chappelle is pointing to in “Equanimity,” but he did send one to the comedian in Portland — which Chappelle notes in the special. The fan says in the post he wasn’t thrilled his letter was used as a set-up for more trans jokes. Compounding the issue for Foster is that Chappelle mislabeled him as a transgender fan, when he says he’s a cisgender man with trans friends.

“Yet, the entire segment talking about the letter was, and remains, a long set up to more of his trans material,” wrote Foster. “Weirdly, the rewrite makes the bit even more dismissive, ignoring a complaint ostensibly from someone directly affected by the material rather than a bystander like myself.” 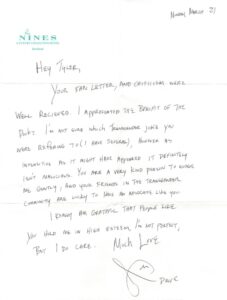 Foster did include a handwritten response from Chappelle in his Medium post. “Your fan letter, and criticism were well received. I appreciate the benefit of the doubt,” responded the comedian. But the fan said in his Medium post he found the “Equanimity” jokes to be more offensive than the material that spurred his letter in the first place.