If you’re going to give Dave Chappelle a chance to sing Radiohead’s “Creep,” he ‘s going to take it. And on Sunday night, that’s exactly what the comedian did, joining the Foo Fighters at Madison Square Garden to sing the iconic song.

Chappelle happened to be in New York already for the premiere of his new documentary, “Dave Chappelle: This Time This Place,” at the Tribeca Film Festival. His film re-opened Radio City Music Hall for the first time since the pandemic hit.

Ironically, the Foo Fighters concert also marked the first full-capacity event at MSG since the start of the pandemic, with everyone in the crowd required to show proof of vaccination upon entry. No masks were required for the show. 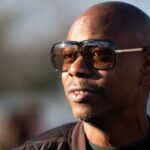 Joining Dave Grohl and crew on stage, Chappelle gave the song his all (though he definitely avoided those falsetto notes in the middle of the song), soaking up the affection of the crowd and making sure they all sang along. Once he finished, Chappelle literally dropped the mic before strutting off-stage.

Sunday’s performance with the band wasn’t the first time Chappelle has jumped on the opportunity to sing “Creep” with some famous voices. In fact, he’s done it a lot. In 2016, the comedian sang the song with Lenny Kravitz at an “SNL” afterparty. In 2017, he joined Ed Sheeran on the mic at a different after-party in Washington D.C., and also sang it with John Mayer at a secret show in Portland.

You can watch Chappelle’s performance here and above.