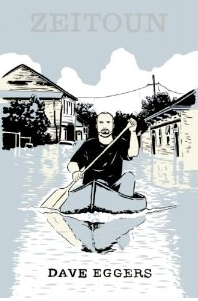 "Zeitoun," novelist Dave Eggers’ tale of heroism and racism in post-Katrina New Orleans, took two prizes at the Los Angeles Times’ Book Prizes on Friday night. Eggers won in the current interest category, and took a second prize for innovation, for his “refreshing disregard for conventional wisdom; a forward thinker who is not afraid of print, but also not afraid to look ahead to the future, and who is drawing a new generation of writers and readers to the written word.”

Other winners included historian Kevin Starr for his latest opus on California in the 1950s, and Linda Gordon, for her biography of Dorothea Lange. Rafael Yglesias won in the fiction category for "A Happy Marriage."

LOS ANGELES, April 23, 2010 – The Los Angeles Times kicked off its weekend-long celebration of literature, authors, reading and community with its 30th Annual Book Prizes at The Times’ Chandler Auditorium. Held on the eve of the Festival of Books – the country’s largest public literary festival – Times’ Book Editor David L. Ulin presided over the ceremony which honored extraordinary authors in 12 categories, including the first-of-its-kind appreciation of the Graphic Novel genre. Evan S. Connell received the Robert Kirsch Award for lifetime achievement and Dave Eggers was presented the new Innovator’s Award for bringing storytelling into the future through cutting-edge business models, technology and applications of narrative art. Eggers also became the first writer to ever take home two prizes in one night, winning in the Current Interest category for Zeitoun.

Connell’s distinguished body of work was cited as that of “a compassionate contrarian and a gloriously insidious philosopher of our true heritage. His novels, short stories, essays and poems range across centuries and continents, focusing sometimes on the great events of history and other times on the secret moments of a private life, and often both at once.”

Eggers, bestowed the inaugural Innovator’s Award,  was noted for his “refreshing disregard for conventional wisdom; a forward thinker who is not afraid of print, but also not afraid to look ahead to the future, and who is drawing a new generation of writers and readers to the written word.”

The Los Angeles Times Book Prizes were established in 1980. Finalists and winners are determined by panels of published authors who specialize in each genre. Category winners receive a $500 cash award and Kirsch and Innovator’s Award winners both receive $1000.