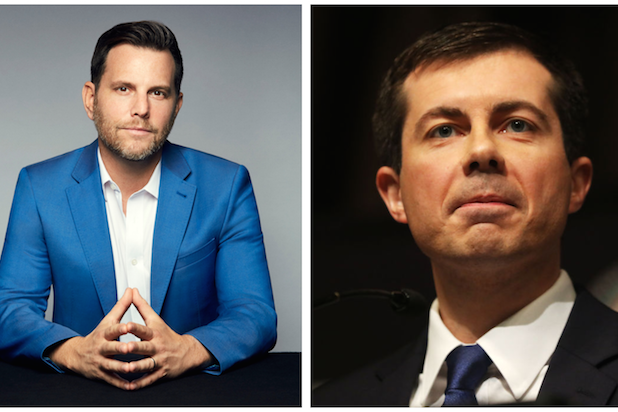 For a brief moment, it looked like Dave Rubin had scored a great “get” for his popular politics-focused YouTube channel: an hour-long sit-down with 2020 presidential hopeful and South Bend, Indiana, mayor Pete Buttigieg, lined up after sending out a cold invitation over Twitter.

That was derailed last week after HuffPost reporter Andy Campbell and Vox correspondent Carlos Maza, as well as Angelo Carusone, president of the liberal advocacy group Media Matters for America, publicly questioned why Buttigieg’s press secretary, Chris Meagher, would even consider putting the candidate on “Rubin Report” given the views held by some past guests of the show. (Campbell called the interview a “bad idea” for Buttigieg, while Maza deemed it “absolute madness.”)

Rubin was surprised by the uproar by members of what he dubbed “the outrage mob” — and the political advocacy on the part of members of the media.

“How do these people — forget Media Matters for a second — how does a writer at HuffPo or Vox truly look themselves in the mirror and consider themselves a journalist when they’re literally trying to pressure politicians from talking to interviewers?” Rubin told TheWrap. “They’re not journalists, they’re activists.”

(Maza, Campbell and Meagher did not respond to TheWrap’s request for comment.)

To Carusone, who is an activist, it was fair game to call out Rubin since the popular YouTube interviewer’s last guest had been Mike Cernovich — the right-wing pundit who in 2016 had pushed the Pizzagate conspiracy theory falsely suggesting that top Democrats, including Hillary Clinton, were behind a child sex ring operating out of a pizza parlor. Cernovich later deleted tweets tied to the matter and distanced himself from it in several Periscope videos.

“That whole discussion was taking place at the same time that Rubin was promoting his interview with Mike ‘Pizzagate’ Cernovich, whose brand is self-evidently disgusting,” Carusone told TheWrap. “I don’t think it’s a stretch to point out that being juxtaposed with Mike Cernovich is not a good look for a presidential hopeful.”

He continued: “The media landscape these days is so complex and fluid that it’s a challenge for anyone to keep up and the desire to communicate with wide audiences also needs to be balanced with considerations of the quality and characteristics of the platform that’ll be elevated by the presence of a serious presidential contender.”

That argument is essentially white noise to Rubin, who said free speech is the “cornerstone” of his YouTube channel, which now boasts more than 1 million subscribers. When pressed if interviewing provocative guests like Cernovich legitimized their views, Rubin was unconvinced.

Rubin, a self-described “former lefty,” doesn’t hold a grudge against Buttigieg or his team over what happened — even saying he’d be shocked if Buttigieg was aware of the full story. But he considers it a missed opportunity to have a “great, fruitful conversation” and considered himself a casualty of the left’s fixation with policing speech.

“What business of Media Matters is it if Mayor Pete talks to me or not? You’re never left enough for these guys,” Rubin said. “I’m gay married. So is [Buttigieg]. When would that hour-long conversation between two functioning adults who happen to be gay married [be off-limits]? If there was nothing else to discuss, that would be interesting enough in and of itself.”

He added: “If I’m too far outside of the mainstream for him to talk to, then really, who is left?”

Carusone pushed back against any claims of left-wing “censorship,” saying traditional newsrooms and reporters routinely fight to get top guests. “If it didn’t work out for Rubin this time, but that’s the direction he wants to go, then learn from the experience, take some responsibility and elevate your standards,” Carusone said.

Moving forward, Rubin said he sees no reason to curb whom he invites on his show. Political leanings be damned, he simply wants his guests to be “interesting,” he said. Recent guests have included conservative commentator Ben Shapiro, comedian Nick Di Paolo and independent journalist Tim Pool.

“Sometimes I end up talking to some somewhat-shady characters. Sometimes maybe one follow-up [question] isn’t perfect, or I would’ve done this a different way,” Rubin said. “But I’m really just trying to be present in that room and show people you’re allowed to take unpopular opinions and standup to the mob… there’s a reason they’re going after me; they need to extract a very heavy price of a former lefty leaving, because they don’t want anyone to leave. And I just refuse to bow.”