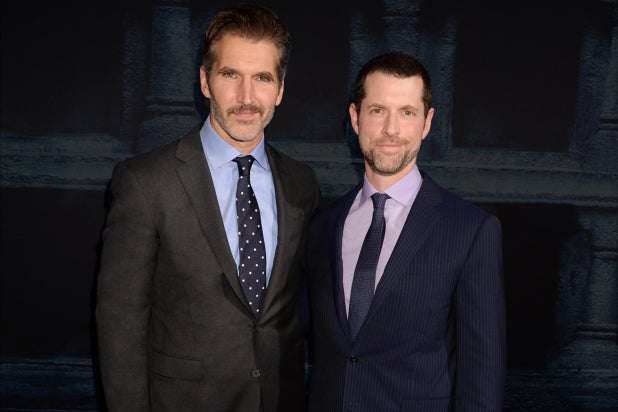 “Game of Thrones” creators David Benioff and D.B. Weiss are set to develop a feature film adaptation of the graphic novel “Lovecraft” at Warner Bros., an individual with knowledge of the project told TheWrap.

Benioff and Weiss’ untitled thriller is based on Keith Giffen’s 2004 book “Lovecraft,” published by DC Comics imprint Vertigo, that imagines a world in which H.P. Lovecraft’s monsters were not part of his imagination but were real.

Part biography of Lovecraft and part fantasy, the book depicts the author as having actually managed to make contact with evil from within another dimension. The film will specifically be set in the 1920s and follow the myth of the monster Cthulhu.

Phil Hay and Matt Manfredi, who wrote “The Invitation” and “Ride Along,” will write the screenplay. And “The Invitation” director Karyn Kusama will serve as an executive producer on the project.

Benioff and Weiss recently signed a film and TV deal with Netflix back in August. The duo won an Emmy on behalf of the eighth and final season of “Game of Thrones,” and they were also recently credited as writers on the Will Smith action film “Gemini Man.” It was also recently reported that the two are no longer in the works on their own “Star Wars” trilogy at Disney and Lucasfilm.

DC Comics’ Vertigo imprint was established in 1993 to publish titles with graphic or more adult-oriented content, including hits like “The Sandman,” “Lucifer,” “Preacher,” “100 Bullets,” “Y: The Last Man” and “Fables.” The line is set to be discontinued in January 2020.

News of the Benioff and Weiss project was first reported by Deadline.