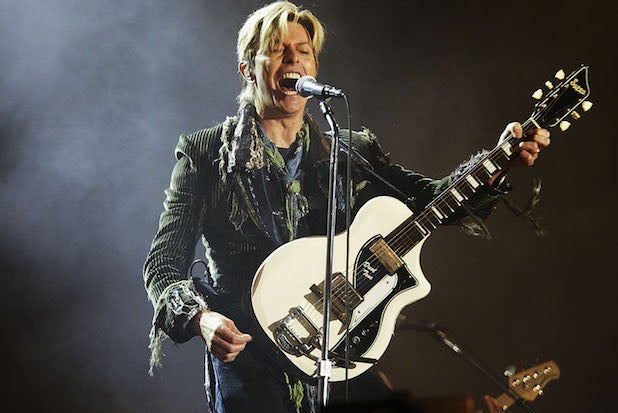 As David Bowie fans around the world pour out memories of the late rocker, listeners are flocking online for the soundtrack to their remembrances.

Streams of Bowie’s music surged 2,700 percent on Spotify Monday compared with a day earlier, and Pandora listeners have created more than 200,000 Bowie stations so far, compared with just 574 Bowie station additions on Dec. 1, according to the digital music services.

Meanwhile, Bowie’s tracks and albums — even those released decades ago — are at the top of iTunes charts.

Among iTunes’ album sales, Bowie occupied four of the top 10 spots. His album “Blackstar,” released just days before his death on Sunday, occupied the top of the chart, followed by a “Best of Bowie” compilation album at No. 2. The records “The Rise and Fall of Ziggy Stardust” and “Hunky Dory” were fourth and sixth, respectively.

Single tracks were popular on Apple’s music store too. “Space Oddity,” Bowie’s hit from 1969, was the fifth most-downloaded track on iTunes Monday, according to the real-time chart in Apple’s online music store. His famed song “Changes” was 10th.

Google noted that the top-searched song by Bowie in the last 24 hours was “Heroes,” the first single off his 1977 album of the same name. It was followed by “Lazarus,” a track off his new album released last week, the video for which, some have noted, foreshadows his passing. “Space Oddity,” “Starman” and “Let’s Dance” rounded out the Google top search list.

Bowie, a rock icon known for his musical skill, style and savvy for artistic reinvention, died on Sunday at the age of 69 from cancer.