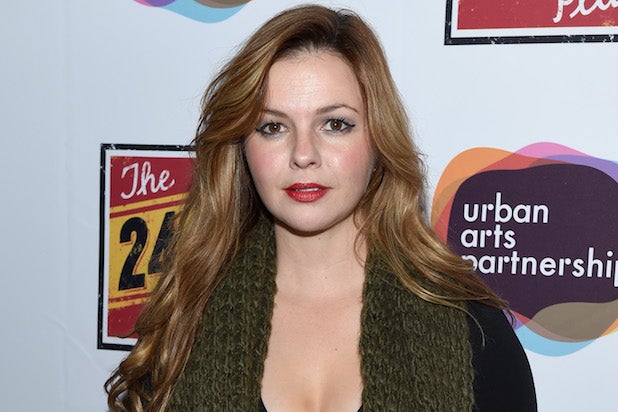 Don’t worry, David Cross; your wife has your back.

Actor/comedian Cross, who has been under fire this week due to an accusation of racism leveled at him by actress Charlyne Yi, received a bit of support from his wife, actress Amber Tamblyn, on Thursday.

Tamblyn weighed in on the topic after being dragged into the conversation with an at-tag from another Twitter user who took issue with Cross’ explanation of the incident.

“Gross! Own it and say you are sorry! What is so hard about that?!” wrote one critic in response to an article noting that Cross said he might have been doing a “Southern redneck” character during his offending encounter with Yi.

A second Twitter user brought Tamblyn into the conversation, writing, “Ugh what is he doing?? Meanwhile his wife, the lovely @ambertamblyn, is such an advocate and force of nature.”

Tamblyn didn’t feel terribly complimented by her inclusion in the back-and-forth, declaring, “He said he was sorry, publicly, several times. Please don’t @ me in conversations dragging my husband. Thanks.”

Also Read: David Cross: Charlyne Yi 'Did Not Understand' Racist Comments Were Meant as a Joke

Cross was accused by “Stephen Universe” star Yi in a tweet Sunday. The actress wrote, “I think about the first time I met David Cross 10 years ago & he made fun of my pants (that were tattered because I was poor). Dumbfounded I stared at him speechless and he said to me ‘what’s a matter? You don’t speak English?? Ching-chong-ching-chong.’

“Then after he saw I was offended he asked me if I was going to fight with him karate in a southern accent,” Yi continued. “Then a few years later he was re-introduced to me after my comedy show with his girlfriend at the time & he said ‘Hi nice to meet you’.”

“Charlene, I don’t remember this at all!” he wrote. “It’s bonkers to me and WAY, way out of character. DM me so I can understand all of this.”

On Wednesday, Cross clarified that he was joking during the decade-old encounter.

“With the luxury of time and critical thought (two things antithetical to Twitter) in regards to all of this I believe I may have figured it out,” he wrote in the note shared to Twitter, which was titled “A Fruitless Endeavor Part 2.”

“Firstly, there are two important facts to consider here. 1) I have NEVER said, ‘ching chong, ching chong’ unless I was doing some asshole redneck racist character,” he wrote. “And 2) I was meeting my friends [sic] girlfriend for the first time.”

In the post, Cross describes meeting Yi for the first time at a hotel bar in Louisiana. He explains that upon being introduced to her he “must have done my asshole redneck racist character.” He said he had no indication that Yi or anyone else who witnessed the interaction was offended by anything they saw.

“Charlyne did not understand I was doing my ‘welcome to Shreveport greeting,'” the Atlanta-born actor wrote, referencing the Louisiana city where they had gathered to film a movie. “As well, I had NO IDEA she was upset or I would’ve apologized to both her and Michael. I believe that had to be it because I would never knowingly treat someone like that.”

Gross! Own it and say you are sorry! What is so hard about that?! https://t.co/YEwhSLv82w