Former Ku Klux Klan Grand Wizard David Duke took to Twitter Wednesday evening to offer a ringing endorsement of Laura Ingraham and her much-discussed warning about how both legal and illegal immigration was creating “demographic changes” that “most of us don’t like.”

“One of the most important (truthful) monologues in the history of [mainstream media],” he said in a quote tweet along with a link to a video of the segment from Ingraham’s Fox News show.

He later deleted his remarks, though a screen shot of the moment was captured by the Daily Beast, which first reported the story.

It’s unclear why Duke deleted the message. He did not respond to request for comment from TheWrap.

A rep for Fox News did not immediately respond to request for comment. 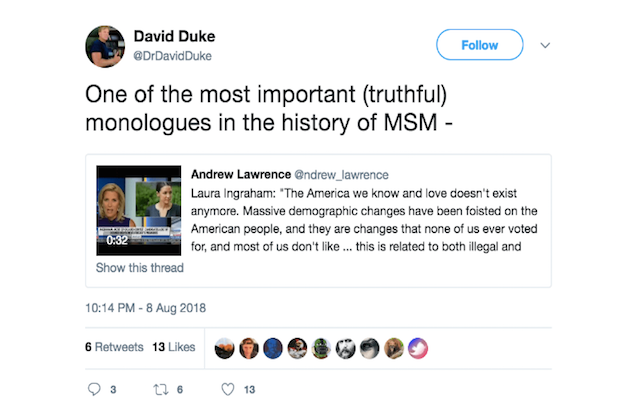 On Wednesday, Ingraham raised a storm of outrage for her monologue, which a broad spectrum of critics online criticized as racist in tone.

“In some parts of the country, it does seem like the America that we know and love doesn’t exist anymore. Massive demographic changes have been foisted upon the American people, and they are changes that none of us ever voted for, and most of us don’t like,” said Ingraham.

“From Virginia to California, we see stark examples of how radically, in some ways, the country’s changed,” she added. “Much of this is related to both illegal and — in some cases — legal immigration that, of course, progressives love.”

Later in the monologue, Ingraham said she was not talking about any specific “race or ethnicity.”

You can watch the moment here:

Duke, a former Louisiana state representative and two-time presidential candidate, has long been one of the most polarizing figures in American politics.

He was present as the deadly white supremacist rallies in Charlottesville, Va., last year and also offered effusive praise to President Donald Trump, who as a candidate struggled to condemn him back in 2016.

Duke also appears as a character in Spike Lee’s new fact-based movie “BlacKkKlansman,” portrayed by Topher Grace. The movie follows a real-life case from the 1970s when an African American undercover detective infiltrated the Klan and duped both its members and the visiting Grand Wizard himself.