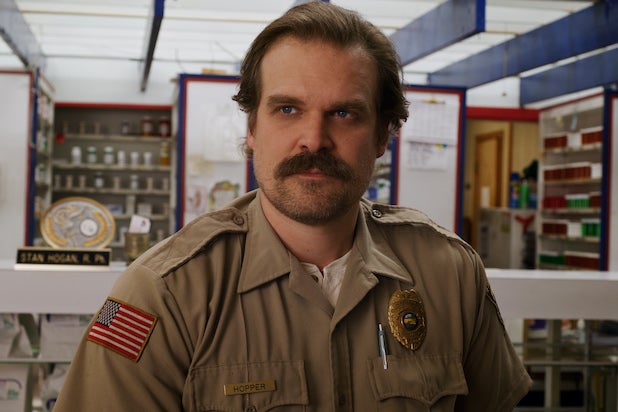 David Harbour said in an interview that of course he knew all along that Hopper from “Stranger Things” would still be alive for Season 4. He just wanted to “preserve the fantasy for everyone.”

We got the hint that Hopper was alive back in the “From Russia With Love” teaser for “Stranger Things 4” back in February, but Harbour spent the bulk of 2019 telling journalists that he really was in the dark about whether Hopper would return after the Season 3 cliffhanger. He even lied to Seth Meyers’ face and called the Duffer brothers on air as though they were still figuring it out.

“I knew. We knew. We had talked about it,” Harbour said in an interview with Total Film. “I just wanted to preserve the fantasy for everyone. And it’s such a weird position that we’re in now with so much media, that everybody wants to talk to you about it.”

Harbour said he’s “very close” to the Duffer brothers and knew where the story was going from the beginning — and that includes dating back to the show’s early days in the first season.

“I know where the story’s going, and I’ve known from the get-go. And I think that’s been the great thing about this story,” Harbour said. “You’ll be able to look back at season one and see a lot of things that happen further down the line that relate to that.”

Harbour compared his “resurrection” to Gandalf from “Lord of the Rings,” saying that his becoming the “American,” as a post-credits scene in Season 3 teased, was all part of his character’s evolution.

“I’ve had those discussions with them from the very first season. We were always interested in that idea of the Gandalf resurrection — Gandalf the Grey who fights the Balrog and then becomes Gandalf the White,” Harbour said. “It’s the idea of the resurrection of the character. And mythologically, Hopper, in a sense, had to change. I mean, you couldn’t go on the way he was going on. He has to resurrect in some way. So it was a great opportunity to do that. So we’ll see a very different guy going forwards. The same guy but in a different vein. It’s a very cool thing to be able to play.”

Also Read: 'Stranger Things' Is Getting an Immersive - and Pandemic-Friendly - 'Drive-Into' Experience in LA

While Harbour plays an American stuck in Russia in the ’80s in “Stranger Things,” he plays an actual Russian who has been ostracized from the government in Marvel’s “Black Widow,” which is scheduled to hit theaters in November (at least for now).

“The American mentality of the ’80s ‘cowboy’ American that Hopper is in Russia, it’s a very different dynamic than a Russian dissident or a Russian former KGB or whatever being ostracized,” Harbour explained of the differences of the two characters.

The fourth season of “Stranger Things” was forced to halt production due to the coronavirus earlier this year, and though Netflix has not confirmed a start date for production or when the show itself would return, Deadline reported on Friday that a tentative start date of September 28 was set for the show.