David Harbour has opened up about his character Red Guardian in the upcoming film “Black Widow” from Marvel Studios in a new interview with TheWrap.

“He’s this guy who is closely linked to Natasha back in the day. I don’t think it’s been quite revealed exactly how, but I think you can see in the family dynamic that he was a bit of a fatherly figure to her. And a number of years go by and he’s past his prime. So he gets back into his superhero outfit, and it still fits, but it’s a little tighter than before. I think the great thing about the Red Guardian is he really is– he was the Captain America of his day for Russia. And he was the great hope of Russia, in a certain sense,” Harbour said.

In the Marvel Comics, Red Guardian first appeared in 1967’s “Avengers” #43, which was written by Roy Thomas and drawn by John Buscema. That particular storyline saw the Black Widow kidnapped by villain Colonel Ling. When The Avengers attempt a rescue, Red Guardian sees his opportunity to prove himself better than his American counterpart – Captain America.

Also Read: 5 Things to Expect From An 'Avengers'-Free Box Office in 2020 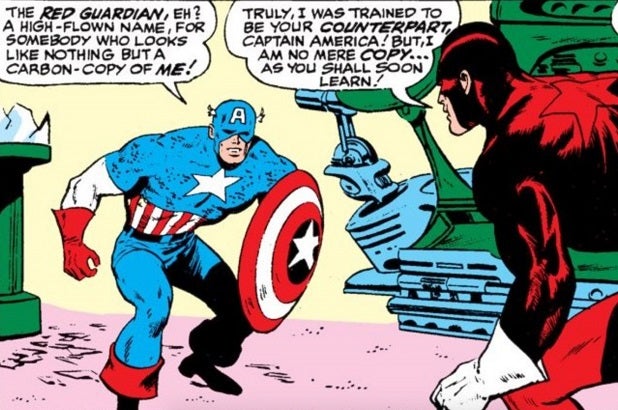 Harbour goes on to say that the Marvel Cinematic Universe version of Red Guardian will be flawed. “And he kind of, as you’ll see in the movie, he blew it in certain ways and he’s trying to start up again. I really like that angle on a superhero. All the talk with superhero’s can be focused on their invincibility, so where do you find the cracks in that? And Red Guardian has tons of cracks all over him. And he’s not the heroic, noble man that you want him to be. He both comically and tragically has a lot of flaws. And I love that about it. And also, he has a lot of strengths,” Harbour said.