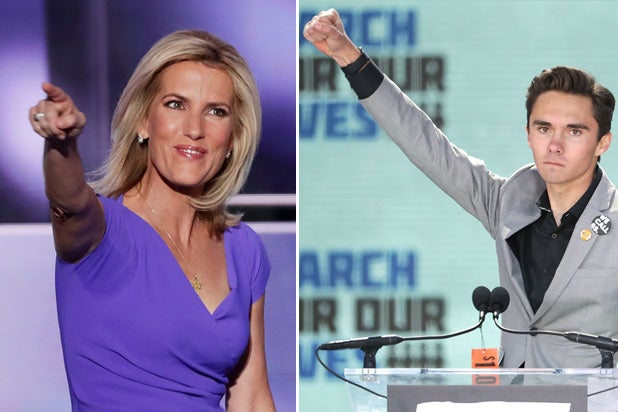 “So @IngrahamAngle we meet again. Who are you biggest advertisers now?” said the teenager in a tweet. In a followup, he also listed a series of new advertisers including Ace Hardware and John Deere.”

Both tweets swiftly took off.

So @IngrahamAngle we meet again. Who are you biggest advertisers now?

If we get these advertisers pulled maybe @Ingraham will have to become a camp counselor and learn how wrong she is.
1. @BeachesResorts & @SandalsResorts
2.@SIRIUSXM
3. @CarfaxReports
4. @AceHardware
5. IAC (Angie’s List, Home Advisor, Match)
6. @Cabelas
7. @JohnDeere

Fox News told TheWrap in a statement: “Laura Ingraham’s very personal, on-the-ground commitment to the plight of impoverished and abandoned children — specifically in Guatemala — speaks for itself. So too does her strong belief in a commonsense, legal immigration system, which will continue to be a focus of her show. Fox News will never tolerate or give in to attempts to silence diverse viewpoints by agenda-driven intimidation efforts.”

The spark of the boycott appears to be Ingraham’s comments on her program last night in which she compared immigration detention centers to “summer camp” and broadly brushed off the growing outrage in liberal media over the issue.

“Well, consistent with American law, when a party is arrested, your children are either sent to relatives, or they become wards of the state,” she said. “So since more illegal immigrants are rushing the border, more kids are being separated from their parents and being temporarily housed in what are essentially summer camps.”

The boycott is Hogg’s second stab at the conservative Fox News host. In March, the teenager launched his first boycott after Ingraham mocked him for failing to get into a number of universities he had applied to. The ensuing fallout sent dozens of advertisers fleeing. Ingraham was forced to apologize, directly after which she took vacation as the heat intensified.

After Hogg’s initial call for a boycott, Ingraham’s ratings actually improved. A second boycott was launched by Hogg  against financial firms BlackRock and Vanguard of their investments in gun manufacturers.

The new advocacy on behalf of undocumented immigrants is well outside Hogg’s original purview of relevance and suggests the activist teenager will be sticking around in the public eye long after the Parkland shooting recedes into memory.