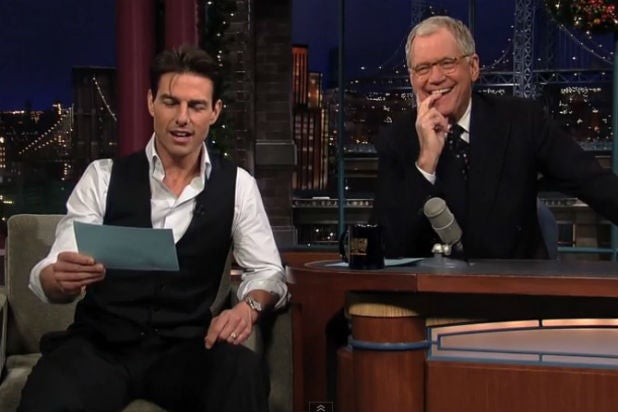 (Spoiler alert: Please do not read if you’ve not watched Monday’s special “David Letterman: A Life on Television”)

After over three decades on the air, David Letterman deserved a show about his show.

“David Letterman: A Life on Television” celebrated the career of the veteran late-night host on Monday as he entered his final month on “The Late Show.”

The CBS special aired in the primetime spot at 9.30 p.m. before Letterman welcomed President Barack Obama on to the show for the last time.

Hosted by Ray Romano — who told viewers “I wouldn’t be here if it wasn’t for David Letterman” — the show took a look back at the 6,028 episodes that Letterman has hosted over the years.

Among the memorable clips were a very young Justin Bieber showing off one of his first tattoos, Letterman dropping an F-bomb with Sienna Miller, Howard Stern taking off his pants and jiggling his belly, and the late Chris Farley doing cartwheels onto the set — before falling over a chair.

Of course, the iconic ‘Top 10 List” was remembered with a mashup of some of the classic countdowns over the decades, such as the number one tip from Betty White for living a long life: “Don’t waste your time watching this crap.”

Not all the action took place in the studio as a montage of Letterman’s adventures outside showed him throwing footballs down 53rd St., taking orders at a fast food drive-through and catapulting fruit off a roof.

Viewers also got to see some of the musical guests that Letterman has hosted, such as U2, Barry White, Paul McCartney, Bob Dylan and Beyonce, as well as presidents Bill Clinton, George W. Bush and Obama.

No retrospective would be complete without Letterman’s animal stars as the best of “Stupid Pet Tricks” were featured, along with a collection of more exotic creatures who have invaded the studio.

Also Read: Michelle Obama to David Letterman: 'I Would Help You Raise Your Children' (Video)

In a fitting move to close out his legacy, Letterman paid homage to the man who gave him his big break on late-night, Johnny Carson.

While most of the clips were lighthearted fun, Letterman looked back at what was no doubt the hardest show of his career following the 9/11 attacks.

“Watching all of this, I wasn’t sure I should be hosting a television show,” he said, before telling viewers: “New York City is the greatest city in the world.”

The final episode of “The Late Show With David Letterman” airs May 20 on CBS. Stephen Colbert is set to take over for Letterman in September.