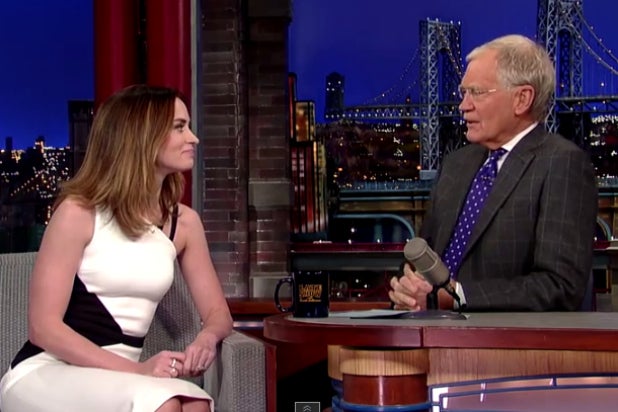 In “Into the Woods,” Emily Blunt plays a baker’s (James Corden) wife who desperately wants to start a family, but is sadly barren. The talented actress seems like she’d be perfectly suitable for the Disney fairy tale role, there was just one problem: in real life Blunt was quite pregnant while filming the story about how she cannot get pregnant.

At first it was no big deal, Blunt told David Letterman on Tuesday night’s “Late Show.” She was about four months along when they started filming, but seven-and-a-half months by the end. That meant the props she had to hide behind graduated from a bag to a cow. Yes, a cow.

Then the conversation shifted, but the humorous banter remained.

“I’m no obstetrician…” Letterman started, as if the admission were necessary.

“It would be amazing if you were,” Blunt cut him off. “Like, on the side.”

“Yeah, in addition. I’m not only a talk show host,” Letterman played along. “I’m an obstetrician.”

“All you Jimmys out there can just suck it,” he quipped.

“Into the Woods” goes into the theaters on Christmas Day.