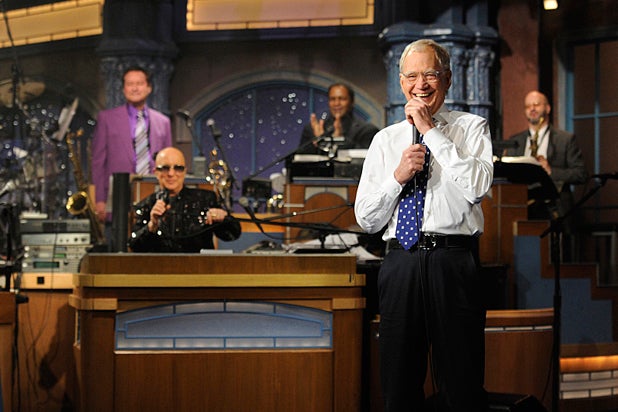 David Letterman’s “Late Show” went off the air on May 20, 2015, and since then, all the lip-sync battles and carpool karaokes haven’t quite filled that perfect quota of weird that Letterman once provided.

But as author Scott Ryan argues in his new book “The Last Days of Letterman: The Final 6 Weeks,” Letterman hit a stride of old-fashioned, genuine late night talk that rose to the level of Johnny Carson in his final shows.

“Dave and his guests actually talked to each other. Very few of the guests were appearing on the show to promote their latest movies. They were actually coming on the show to talk to their friend,” Ryan writes in the opening to his book. “This time they brought it back to the days of Jack Paar and Johnny Carson. For six weeks of time, conversation was the true king of late night.”

For his book, Ryan conducted interviews with more than 20 writers, employees and managers on “The Late Show,” asking them to recall some of their memories that allowed those final airings to come together. He describes in copious detail the events of each show leading up to the finale, including behind-the-scenes moments that shed light on the emotion experienced by the crew and the guests that graced Dave’s couch.

Here are a few behind-the-scenes highlights from the book: 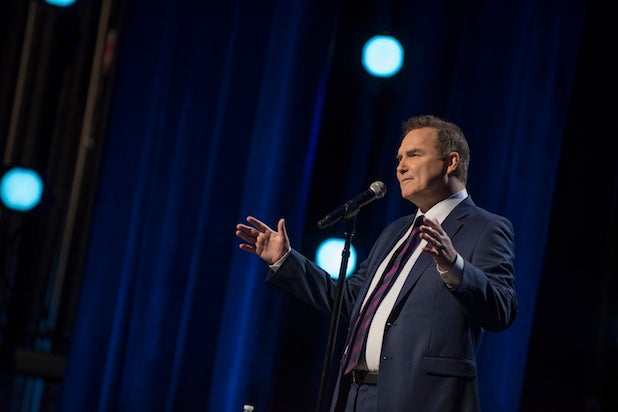 Rather than just be one of Letterman’s guests, comedian Norm Macdonald asked if he could perform a tight five of comedy, making him one of the last people to perform stand-up on “The Late Show.” “The Late Show” writers describe Macdonald as having prepared extensively for the coveted spot behind an interview with Oprah Winfrey, coming into the studio more than five hours early with cocktail napkins and full notebooks packed with material.

But Macdonald’s tearful tribute to Letterman, in which he performed one of Dave’ old bits, surprised everyone with how much he cared.

“I have known Norm a long time. He is weird, crazy, and brilliant and he is not emotional,” writer Bill Scheft said in the book. “That was quite magical and right up there for me. I can’t think of anything ahead of that.” 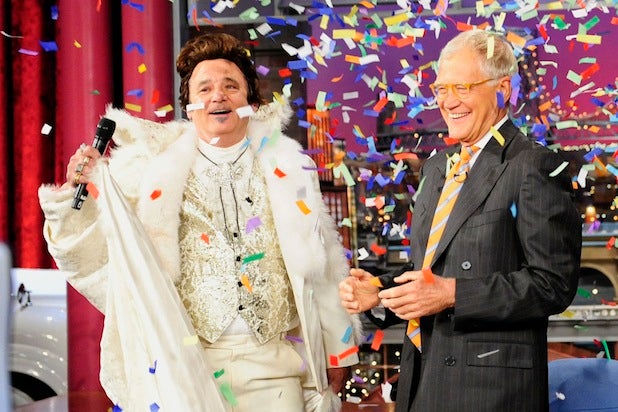 2. Bill Murray Got the Crew Tipsy Before Saying Goodbye.

It will come as no surprise to anyone that Bill Murray is an elusive figure, and “The Last Days of Letterman” only perpetuates his mythos.

“There really wasn’t an order to booking Bill Murray,” said Sheila Rogers, Letterman’s supervision producer and talent manager. “He doesn’t have a publicist or agent that you deal with. I would text him and never know when I was gonna hear back from him. Sometimes he would text back something that would be funny, but wouldn’t really be an answer.”

Murray would ultimately show up, bursting out of a giant cake meant for Letterman, only to rush over and hug him while still drenched in frosting. More peculiar, however, was when Murray decided to abruptly, in the middle of his interview with Letterman, recite an advertisement for Slovenian vodka. When Murray rehearsed this bit with the writers, he opted to use a real bottle of vodka rather than a prop bottle filled with water, pouring large glasses to get them sloshed ahead of meeting with Letterman to describe the routine.

“So now I am drinking with Bill Murray and one of my best friends,” writer Mike Buczkiewicz said. “This is gonna go horribly awry because we still have to produce the second-to-last ‘Late Show.'” 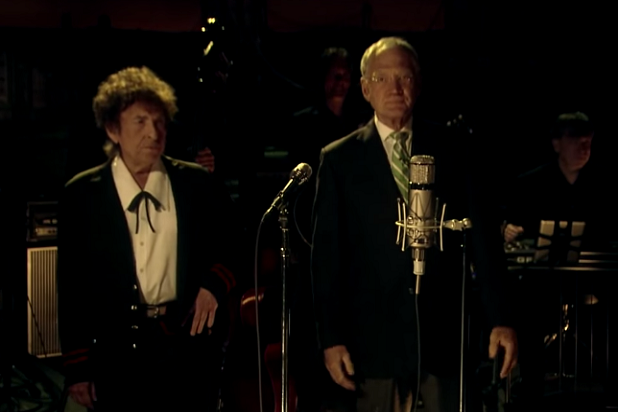 3. Bob Dylan Was Not the Show’s First Choice.

On the second-to-last episode of “The Late Show,” Bob Dylan gave a rare, dimly lit, emotional performance of the old standard, “The Night We Called It a Day.”

And while booking the generally camera-shy Dylan proved to be a big get for this special occasion, some of “The Late Show” staff didn’t want Dylan as their first choice, but instead preferred Billy Joel.

“I wanted the circle to come all the way around because Bill Murray and Billy Joel were on the first show on CBS,” Brian Teta, a segment producer, said. “I really wanted Billy Joel to sing ‘Miami 2017 (Seen the Lights Go Out on Broadway).’ I wanted him to sing it on the marquee. You can’t go wrong with Dylan, but I liked the idea of the first guest and musical performance back on the last show.” 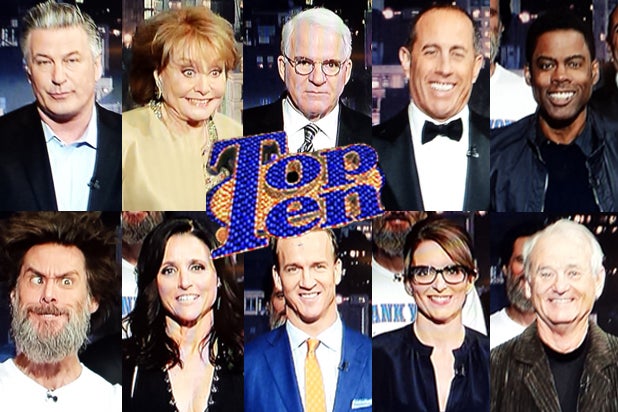 4. The Staff Agonized Over the Final Top Ten List.

For weeks, just about every writer on staff prepped for what would be said by 10 different celebrities, delivering one line a piece about “Things I’ve Always Wanted to Say to Dave.” One writer explained the origins behind a joke in which Letterman’s son Harry keeps asking, “Why does Daddy have to go to prison?”

“To me, only Dave can do that joke,” Scheft said. I was a stand-up for 13 years and my late wife was a stand-up, and she told me really early on, ‘The best comics do material that only they can do. Nobody else can steal the joke because it’s of them.'”

As for the Top Ten list, the segment producers had to work extensively to make sure Peyton Manning’s schedule was entirely cleared, they had to rewrite a joke for Julia Louis-Dreyfus at the last minute, and agonized over whether Tina Fey, who previously joked she’d never have to wear a dress again on a talk show, would actually wear a dress to the finale. 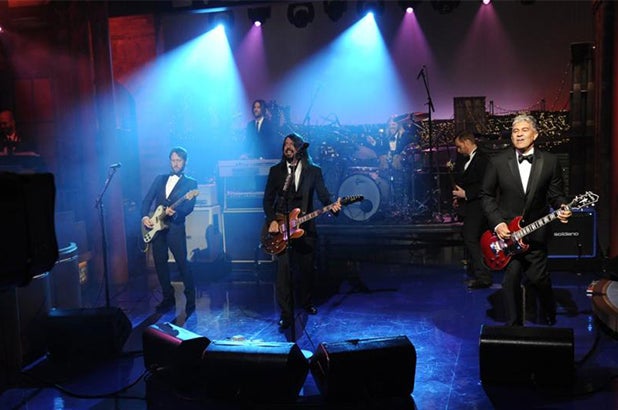 From November 2014 to May 2015, “The Late Show” staff spent countless hours working to edit together a montage for Letterman’s finale. They started editing a highlight reel montage before Letterman announced he was retiring, telling an editor that it was for an anniversary special and not for his retirement.

Letterman dropped little hints of what he wanted in the montage, including that he wanted the whole thing to be done to the tune of Foo Fighters’ “Everlong.” But just as they were near done editing, Letterman threw a monkey wrench into everything by saying Foo Fighters should play the song live. It posed the challenges of getting the band to agree to perform, even though they wouldn’t appear on camera, and to get them to sync up their live performance with their carefully edited montage. The band needed to hit a beat just as a clip of Farrah Fawcett shouting “wow” played in the montage.

“They played at rehearsal. It was close. It was nothing like I had it when I edited it within an inch of its life and perfect to the drumming, but it was good and close enough,” executive producer Barbara Gaines said. “When they had it perfect, I ran up on stage and hugged Dave Grohl. I don’t know him, but I screamed, ‘That was so amazing!’ He’s like, ‘Who? Why? Get this woman off me.’ I was beyond excited.”