Are you? Granted, maybe you didn't sleep your way through a coterie of sweet-young-underlings, but do you want to throw that first stone?

Didn't think so. Dave's a typical man-pig. They can be found in any business or profession. Especially in Washington. 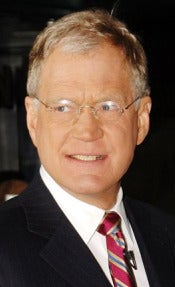 But at least he isn't in public office or screwing around with school staffers. It's showbiz, baby! Instead of a casting couch he apparently had a casting suite. Not bad for a once self-proclaimed bachelor for life. But did he pressure those staff members with whom he enjoyed a little diversion, or was it mutually beneficial? I'm sure the National Enquirer will be letting us know later this week.

I'm not excusing his gross behavior, but I repeat: Men are pigs. Sorry, most men are pigs. If they're not thinking of doing the deed, they're doing it and/or planning the next tryst.

Oh, I wish there was a way to punish one pig-boss of mine who used to sidle up behind me to, uh, make a point. But "back then" there was little recourse in a male-dominated workplace other than to tough it out. But when you're the famous host of a show who loves a good sex scandal to weave artfully through a monologue, better watch your step mister. Lest you become hoisted by your own petard.

Those little sketches with "Monty" (one of his pet names for the lover whose diary was stolen or copied) always raised the back of my little neck hairs. The two of them were a little too "chummy" for work colleagues, and I must admit to having a sixth sense about another kind of relationship off-script.

She was a good sport, though and Dave must have loved making her dress in kinky outfits and act goofy among the hoi polloi outside the studio. I especially loved the Little Bo Peep schtick, by the way. Wonder if he had her play dress-up ... oh never mind.

She was an awfully good sport. If I had someone pay for my law school, I'd be a good sport too. But dressing like Little Bo Peep might have been a deal-closer for me. Mother Goose, maybe.

But I digress. Dave is one-of-a-kind, whose hilarious show I watched even when it was stupidly scheduled in the morning in Philadelphia. He was still Dave the jester, and he was good at it. This mea culpa might not go over well with his mate, and who could blame her for being outraged? What kind of juvenile behavior did she have to put up before they wed? Isn't he a little too long in the gap-tooth for those dalliances? He sure had enough time to get that stuff out of his system before the mother of his child hooked up with him, wouldn't you think?

What female subordinate would resist the power of this fugly man behind the heart problems, bad knees and balding pate? Maybe when your boss can put you through law school, you weigh the pros and cons and figure: What's a little fling gonna harm? Not exactly well-thought-out critical thinking skills for someone in law school.

Apparently, the blow-back has just begun.

Oh Dave, we thought we knew you.