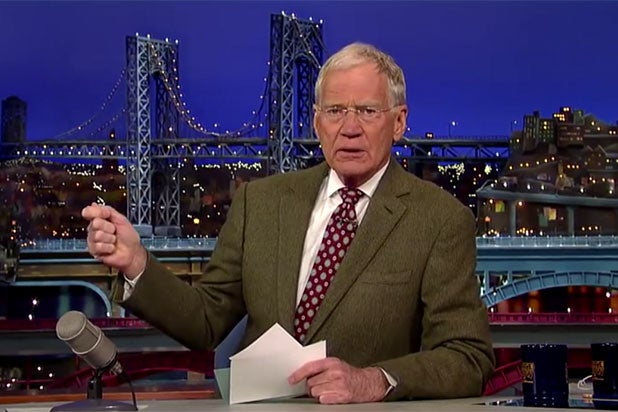 While David Letterman is known for his comedic skits, hilarious monologues and Top Ten lists, there were also some serious moments on the “Late Show with David Letterman.”

However, Letterman always managed to find the right balance between gravity and humor when addressing his audience. Amid audience laughter, Letterman would often get teary-eyed as well. His most famous monologue (and some might say one of the finest moments in the history of TV) was the post-9/11 monologue, in which he commemorated all the firefighters and policemen who lost their lives that day.

Other memorable moments include the interview with Warren Zevon, the episode in which he admitted to his sex scandal, and when he returned from his heart surgery.

Also Read: 9 David Letterman Revelations From His Most Candid Interview

With Letterman preparing to host his final “Late Show” episode on Wednesday, TheWrap picks 7 of Letterman’s serious monologues and interviews.

7. The Warren Zevon interview (2002)
Letterman was a big fan of Zevon, so when the “Werewolves of London” singer was diagnosed with a cancer that would eventually kill him, the talk show host devoted an entire episode to him. The two discussed life and death — with the occasional bit of humor, despite the grim specter hanging over the interview. When the singer was asked how he felt when he heard his diagnosis, Zevon famously replied, “Enjoy every sandwich.” Zevon died less than a year later.

6. Letterman returns from heart surgery (2000)
When Letterman needed quintuple bypass heart surgery, the host took his first sick time off from the show in 18 years. So when he returned, it was obviously a hot topic. He came onto the stage with two nurses in scrubs and started the show with, “Wait till you hear what happened to me. You are not going to believe this.” Naturally, Letterman couldn’t pass up a joke, so he added, “And: I got a haircut!” Yet Letterman became emotional and teary-eyed when he said, “It was five weeks ago today that these men and women saved my life.”


5. Letterman on Johnny Carson’s death (2005)
Johnny Carson passed away in 2005, and Letterman devoted a tribute episode to the late-night icon. Carson was a mentor to Letterman, so his death impacted Letterman deeply. “The thing I used to love about Johnny, is making people laugh. The best part about Johnny is when a joke would not go well, and he would look at the audience and he looked like he had just bought them all drinks and no one said thank you,” Letterman recalled. He went on to talk about how Carson was a tremendous part of the business.

In June 2009, Letterman joked, “Sarah Palin went to a Yankees game yesterday. There was one awkward moment during the seventh-inning stretch: Her daughter was knocked up by Alex Rodriguez.” Palin was outraged that Letterman would mention her 14-year-old daughter, Willow, but Letterman actually meant 18-year-old Bristol, who was unwed and had a child. Palin accused him of promoting child rape. Although there was some laughter from the audience, Letterman was sincere while discussing his mistake, acknowledging that the joke had been made in poor taste and that he would never condone making light of having sex with an underage girl. “Look at my record, it has never happened,” he said angrily. “I don’t think it’s funny, I would never think it’s funny.”


3. Letterman admits to sex scandal with female staffers (2009)
Starting with, “I have a story to tell, would you like to hear a story?” Letterman began to tell the audience about a mysterious package he found on the backseat of his car at 6 a.m. In this box was a letter from someone who claimed they knew about all the bad things Letterman did, with evidence to prove it. He then admitted, “I have had sex with women who work on the show.”

2. Rudy Giuliani visits Letterman after 9/11 attacks (2001)
After the 9/11 attacks, Letterman invited the former mayor of New York City, Rudy Giuliani, to the show. Giuliani discussed what his day was like when the Twin Towers were destroyed, after which Letterman reminded the audience about how many firefighters lost their lives that day.

Also Read: David Letterman by the Numbers: Ratings, Records and Social Stats Before We Say Sayonara

1. Letterman’s monologue after 9/11 (2001)
Struggling to find words, Letterman addressed the tragedy that hit New York and the rest of the world. In the monologue, he discussed Mayor Rudy Giuliani, all the lives lost and the chaos the city had found itself in after the attack. His monologue also discussed the brave men and women who put their lives at stake to save the people of New York, and how those people will never be forgotten. Many people have cited this monologue as one of the finest moments on “The Late Show,” as well as one of the finest moments on TV.

Also Read: Jimmy Kimmel Will Not Air New Episode Against David Letterman Finale Out of 'Respect'