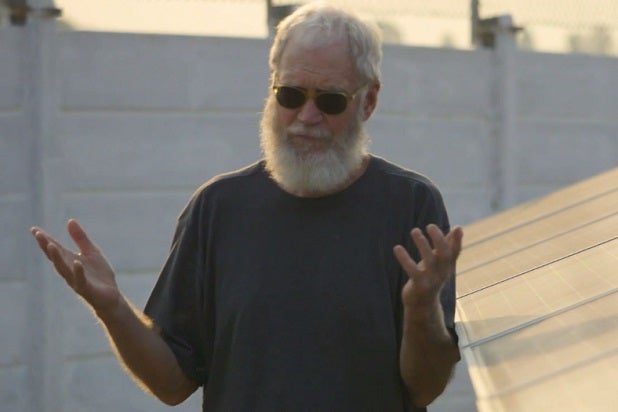 More than a year after vacating his host slot on CBS’s “Late Show,” David Letterman has made his return to television. And the results may shock you.

Well, they certainly shocked him, anyway.

Letterman makes an appearance on an upcoming episode of National Geographic’s “Years of Living Dangerously,” and his impressive hobo-beard isn’t the only thing he’s showing off — he also displays his love of solar energy.

Walking amid rows of solar panels, the casually dressed former late-night host extols the virtues of the sun-based energy source.

“I’m in no position to editorialize about solar power or any kind of renewable power,” Letterman says in a promotional clip for the episode. “I’ve created, excuse the expression, kind of a love affair with this.”

“Think about the coal-fired, dangerous smoke-belching generating plants, and then you look at this,and it’s friendly,” Letterman continues, gesturing toward the panels.

“There’s something very appealing about this, and it’s smooth. Look at it. I can touch it, and it’s safe,” Letterman adds.

Well, mostly safe; in a seeming effort to display his love affair with solar energy, Letterman moves in for a kiss with one of the panels.

Let’s just hope his beard wasn’t too singed by the contact.

The episode titled “A Race Against Time” airs on the National Geographic Channel on October 30, and will also feature an appearance by Cecily Strong of “Saturday Night Live.”