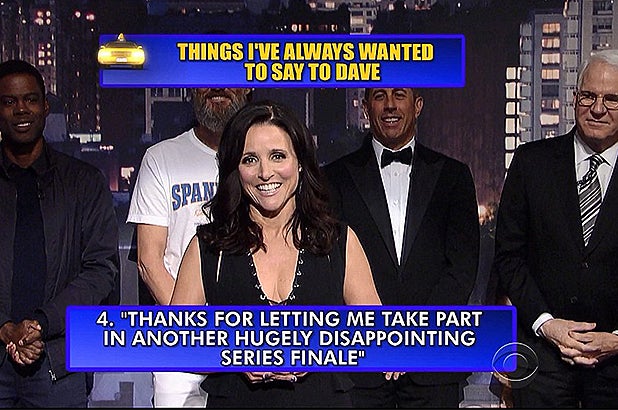 David Letterman cued up one last Top 10 list on Wednesday night, the late-night legend’s final run as host of CBS’s “Late Show” — that said, he didn’t perform any of it.

“I think this is a pretty good list, considering it’s our last list,” Letterman said to set the gag up before letting others have the honors.

Here’s the full list:
10. Baldwin: “Of all the talk shows, yours is most geographically convenient to my home.”
9. Walters: “Did you know that you wear the same cologne as Muammar Gaddafi?”
8. Martin: “Your extensive plastic surgery was a necessity … and a mistake.”
7. Seinfeld: “I have no idea what I’ll do when you go off the air. You know? I just thought of something. I’ll be fine.”
6. Carrey: “Honestly, Dave, I’ve always found you to be a bit of an over-actor.”
5. Rock: “I’m just glad your show is being given to another white guy.”
4. Louis-Dreyfus: “Thanks for letting me take part in another hugely disappointing series finale.”
3. Manning: “You are to comedy, what I am to comedy.”
2. Fey: “Thanks for finally proving men can be funny.”
1. Murray: “I’ll never have the money I owe you.”

After Louis-Dreyfus delivered her line, the camera panned to Seinfeld, which got a huge laugh from the revved-up audience.

Other big moments on the night included the re-airing of a 1996 Taco Bell remote, a new “Day in the Life of David Letterman” segment, a musical performance of “Everlong” by the Foo Fighters, a “Dave With Kids” package and a pre-taped skit featuring Presidents Barack Obama, George W. Bush, Bill Clinton and George H.W. Bush.

Stephen Colbert takes over as “Late Show” host on Sep. 8. Tonight, Letterman ended 33 years of late-night TV, making him the longest-tenured host ever. “The Late Show” has been on CBS since 1993; Dave spent the years prior on NBC.

Wednesday’s show ran about 17 minutes longer than the usual 1 hour, and CBS elected to air it all, instead of editing it down.