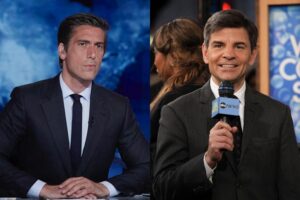 ABC News veteran George Stephanopoulos may be upset to relinquish the throne for breaking news to evening anchor David Muir, but even Stephanopoulos can’t deny the ratings turnaround that Muir has provided for ABC’s “World News Tonight.”

That’s not just a lead change, it is a swing of 2.8 million total viewers. No wonder ABC News just tapped the 47-year-old Muir to head up its breaking news duties, effectively replacing 60-year-old Stephanopoulos in the role. (It helps that he has consistently ranked as the most-liked TV media personality, according to Q Scores.)

Currently, “World News Tonight” is leading its fifth season in a row in terms of total viewers, and is ahead by the largest margin in 26 years. The program is No. 1 in the key news demographic of adults ages 25-54 for the second season in a row and holds the largest lead in that metric in 25 years.

Muir’s momentum is not a brand-new phenomenon, but it also does not appear to be slowing down. Last season, “World News Tonight” was the No. 1 program on all of television — so that’s broadcast and cable — for 23 of the season’s 52 weeks.

All the ratings numbers in this story are according to Nielsen’s Live + Same Day data set. Entertainment programming tends to rely on delayed (DVR, mostly) viewing, but news (and sports) does not.

While Muir’s key-demo ratings have decreased from the Sawyer era, he’s only down 12% among adults 25-54 while Holt has dropped a substantial 33%. So that’s pretty good for the way TV is consumed — and fragmented — these days.

Muir’s show has been on the rise, but “Good Morning America,” which Stephanopoulos co-anchors with Robin Roberts, has sunk in ratings in recent years. That’s more of a product of the morning show environment, however — especially in the Trump era, when viewers have left broadcast television for the surging cable news channels.

Since the 2013-14 season, which was Sawyer’s final as the anchor for “World News Tonight,” both “GMA” and NBC’s “Today” show have seen their overall audiences decline by more than one-third and their demo audiences more than halved. In both instances, “GMA’s” declines are a few percentage points worse than “Today’s.”

In recent years, “Good Morning America” has generally drawn a bigger total audience, while “Today” has led in the key ratings demo.